Home Trend A cartoonist in the concentration camp 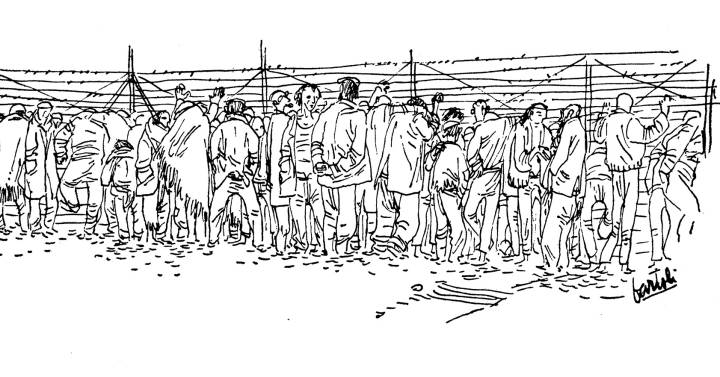 In the concentration camps of French Catalonia —Bram, Argelès-sur-Mer, Barcarès, Saint-Cyprien, Agde, Rivesaltes… -, in the fierce 1939, the triple motto of the République was perfectly fulfilled: freedom, equality , brotherhood. The theoretical freedom, for Spanish republican refugees who so desire, to return to their country (where, yes, a difficult context of persecution and contempt would await them, and who knows what else). The level playing field between all those prisoners on those beaches surrounded by barbed wire: hunger, misery, disease and death. And the forced fraternity between those who shared such a horizon. So in France in 1939, which on February 25 had already recognized the Franco government and on March 2 had named Pétain ambassador to Spain, everything was absolutely consistent and there was nothing to object to.

But a young Catalan cartoonist who had spent the Civil War battling on the Republican side from the Communist ranks was going to make a decision. Abandoned rifle due to force majeure, he would pick up the pencil and resume the fight. From shooting shots in the Battle of the Ebro, Josep Bartoli (Barcelona, ​​1910) went on to capture in a notebook what he had before his eyes: the way in which the French Republic of President Lebrun and Prime Minister Daladier, absolutely overwhelmed by the events, he had welcomed the more than 400,000 Spaniards, including himself: locking many of them between barbed wire. Much of those drawings make up The Retreat. Exodus and exile of the Spanish republicans (El Mono Libre editorial), the book in which his nephew the photographer Georges Bartoli and the journalist Laurence Garcia relate that way of the cross of the republican exiles in the France of liberties, a France that was already closer to collaboration with the Nazis than the Popular Front. This edition in Spanish, with 85 illustrations and 30 photographs of Georges Bartoli himself reconstructing his uncle’s journey, arrives in bookstores with an 11-year delay compared to the French edition (The retreat; editorial Actes Sud, 2009).

After the fall of Barcelona at the hands of the Francoist troops, Josep Bartoli, a left-wing Catalanist, with libertarian sympathies and an anticlerical vocation who never became a military man, crossed the border on foot on February 14, 1939. He was sent directly to the countryside of concentration of Barcarès, near Perpignan. There, like so many others given the sanitary conditions, he contracted typhus. He was sent to another camp, that of Bram, where he would begin to capture the horror: the dead children, the desperate mothers, the defeated and sick fighters, the misery and cruelty of the French gendarmes and the Senegalese shooters who guarded the compound (the gendarmes are portrayed with the face and tail of a pig or as dogs of prey).

Bartoli ran away and there began a true life of film. First in Paris, where he worked as a stage designer in clubs such as the Moulin Rouge and the Folies Bergère. Later, successively, in Chartres, Bordeaux and Vichy, where he was captured by the Nazis, who had already occupied France. On the verge of being transferred to Dachau towards certain death, he managed to escape again with the collaboration of a network of aid to Jewish refugees and reach Marseille, where he boarded the ship Lyautey towards Tunisia. From there he traveled to Oran and then to Casablanca, from where he set sail on another ship bound for Mexico, meeting with the nearly 20,000 Spanish exiles who had settled there under the protection of President Lázaro Cárdenas.

In Mexico City, Bartoli established a relationship with artistic circles and became friends with Diego Rivera and Frida Kahlo, with whom he developed an intense romantic relationship (the love letters between the two were auctioned in 2015 by the Doyle gallery in New York) . It was in Mexico where, in 1944, he published his first collection of drawings under the title Concentration camps 1939-19 … Two years later, the cartoonist settled in New York, where he became acquainted with artists such as Rothko, Pollock or De Kooning. The truth is that he became something like a star in his role as stage designer and collaborator of publications such as the magazine Holiday or the ‘Reporter’ supplement The Saturday Evening Post. Until 1977 he did not set foot in Spain again, on the occasion of a trip to Barcelona. Josep Bartoli died in New York in 1995.

The “life of a movie” is not figuratively. French illustrator Aurélien Froment, Aurel, one of the stars of the comic strip and political satire in publications such as Le Monde, Politis or Le Canard Enchaînéit has already finished Josep, his animated feature film on Bartoli’s exciting life journey. The film is a Franco-Spanish co-production (Les Films d’Ici Méditerranée / Imagic TV) and has the voices of Sergi López and Sílvia Pérez Cruz (who has also composed the soundtrack). Its commercial premiere is scheduled for the end of September, but Aurel and the producer Jordi Oliva received great news on the 3rd day: those responsible for the Cannes Festival informed them that they had just selected it for this year’s edition, which will be held most likely through the formula of films with the “Cannes 2020” label, but screened in other competitions (since the Cannes Film Festival itself was suspended by covid-19). “In a way it is a biography of Josep Bartoli, but in reality it is a fiction told from that life, and basically it is a tribute to cartoonists and drawing in general. It is my way of relating to him, someone I did not know and who could be my grandfather, but from whom I think I can understand what was going through his head, “explains Aurel.

Another presence in this film is that of Berenice Bromberg, the widow of Josep Bartoli. They met in 1958, during a birthday party. A love story was born that would last almost 40 years. From her New York home, Berenice Bromberg evokes the cartoonist this way: “When I saw the drawings in the book the first time Concentration camps I was touched. It was clear in those pages the degree of suffering that Josep had experienced during the war and exile, although he never spoke or behaved like a victim. Instead, he channeled his energy into creating an enduring document on the horrors and inhuman acts committed by fascism. ” Bromberg thus judges those drawings from the concentration camps: “They portray the vices, the afflictions, the arrogance, the corruption, the pomposity and the suffering of the human being. They are beautiful images, because they try to tell the truth no matter how painful it is to contemplate it ”.

Another comment on the drawings that dot the pages of The retreat: “In them there is no place for tenderness, simply because there was not at that time, although there is room for humor, a very acid humor, even in the most terrible things, because my uncle laughed at everything and everyone …, Even of himself ”. These are the words of Georges Bartoli, the nephew of the cartoonist and co-author of the book. Tanned in a thousand journalistic battles in places like Bosnia, Yemen, Latin America, Palestine or Kurdistan, this French-born photojournalist (Béziers, 1957) is the son of exiles in a family with communist, socialist and anarchist components. He is especially interested in defending Uncle Josep’s moral and artistic commitment, but also his absolute independence: “He fought the entire Civil War in the ranks of the Communist Party, but he was a free electron, a libertarian, a Catalanist who was not at all anti-Spanish and at the same time a universalist who liked neither nations nor borders. And above all, a man of the left. But always free ”.

Georges Bartoli explains the reasons why he wanted to evoke in the book the figure of his uncle: “What I wanted to reflect was, based on my uncle’s fictional personality, to talk about us, about the children and grandchildren of exile.” He never wanted to acquire dual nationality. He did not do it for political reasons and above all, he says, morally: “Before I am French, Spanish or Catalan, I am a Republican, and for me the idea of ​​being the subject of a monarchy inherited from Francoism is unbearable. And also because Spain has erased from its history an entire generation, which was that of my parents, it has not settled the accounts with its ancestors ”.

His texts in the book exude an ambivalent feeling towards his country of birth: “On the one hand, France protected my parents and has protected me. But, on the other hand, in France there was a long conspiracy of silence on this issue of Spanish refugees, which was not broken until the 1990s. How France behaved with the Spanish refugee republicans who crossed the border is a terrible stain on the history of my country. It was a collective and conscious amnesia, a revisionism by omission. ” He calls it “the great tragedy of France with Spain” and consists of three treasons: “The first, the agreements of non-intervention in the Civil War; the second, how the refugees were received by putting them in concentration camps, as happened with my uncle; and third, France forgot about the Spanish who formed the first maquis of the Resistance against the Nazis. ”

In Spain they were shitty red, and in France, shitty Spaniards. “If they hadn’t been red, things would have been easier … But no. Many French people thought that the Spanish republicans ate raw children. Now, there were also many French people who went to the concentration camps where the Spanish refugees were to bring blankets and food, they even made up stories to get some of them out of there … Yes, that France also existed. “

5 NFL teams that could be surprise Super Bowl contenders

Charles Barkley says it is Ben Simmons’ time to shine for Philadelphia 76ers |...