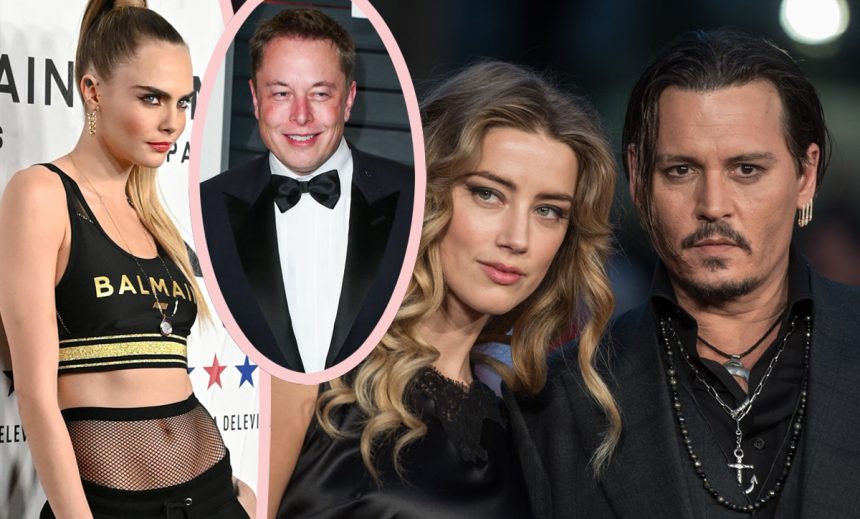 A new celeb name has been sucked into the messiest divorce ever: Cara Delevingne.

Johnny Depp has already filed docs demanding Elon Musk and James Franco turn over their email and phone records from round the time of his 2016 split from Amber Heard. But now Cara is on that list, as well, and the reason is just a little scandalous.

It seems Johnny’s legal team is working to prove Amber cheated on him, first seeking Franco, with whom Amber co-starred in 2015’s The Adderall Diaries, then Elon. While the billionaire claims the connection only started after the marriage was over, Depp has produced witnesses who saw Musk visiting her at their penthouse apartment.

Related: Most Of Amber Heard’s Legal Team Drops Out Of Case

Now, thanks to a brand new deposition, Amber is being accused of participating in a three-way sexual affair with both the Tesla founder AND the supermodel.

In a video of the interview obtained by DailyMail.com, Depp’s attorney Benjamin Chew questions Josh Drew, the ex-husband of Amber Heard’s BFF, Raquel “Rocky” Pennington. Josh and Rocky apparently lived rent-free for months (!!) in another of several apartments Johnny owned in the building — and may have known more about what was going on than Depp himself.

Here’s the relevant Q&A with Drew, whom, we should note, is apparently still friends with Amber and is also covering his legal costs:

BENJAMIN CHEW: Did Rocky inform you Amber Heard was having an affair with Carla Delevingne while she was still married to Johnny Depp?

BENJAMIN CHEW: Did she ever inform you in words or substance while Amber was still married to Johnny Depp that the three of these, Amber Heard, Elon Musk and Carla Delevingne spent the night together?

JOSH DREW: Yes. To the particular date, I can’t say.

BENJAMIN CHEW: So they were having a three-way affair, correct?

Wow. There were previously rumors of an affair between Amber and Cara, who were seen on a few occasions chilling out together around that time — after the separate but ahead of the divorce was finalized. Although nothing was ever confirmed. Frankly, we never bought into it. We mean, because Cara is pansexual doesn’t mean she can’t have pals she doesn’t sleep with!

In this case, however, there’s now at least some testimony that’s what was going on. But will the Valerian and the City of a Thousand Planets star be forced to answer questions concerning the alleged affair under oath?

An insider told the outlet Johnny “hasn’t ruled out” serving Delevingne with a subpoena to force her to testify:

“Cara could also be compelled to give evidence – by either party. It’s definitely a possibility. Almost anything can happen in this case.”

Amber’s legal team previously called Johnny’s attempts to prove infidelity “frivolous” — and when it comes to a question of whether abuse occurred they could be right.

What you think about this new bit of evidence in the endless fight??