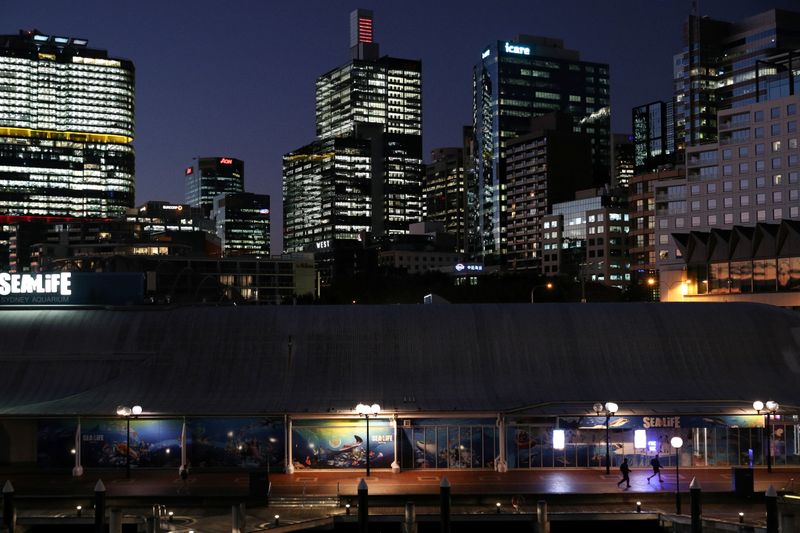 © Reuters. Office buildings are seen amidst the easing of the coronavirus disease (COVID-19) restrictions in Sydney

SYDNEY (Reuters) – Australia’s budget is set to plunge into its biggest deficit since World War Two this year as the coronavirus crisis knocks the country into its first recession in three decades and forces policymakers to roll out hundreds of billions of dollars in stimulus.

Although Australia has managed the pandemic better than most developed nations, the shattering global impact of the outbreak has left its trade-exposed A$2 trillion ($1.43 trillion) economy grappling with skyrocketing unemployment as many businesses sink in red ink.

In a special announcement on Thursday, Treasurer Josh Frydenberg said the budget swung into a massive deficit of A$85.8 billion ($61.3 billion) in the year-ended June 2020 compared with an earlier forecast for a surplus.

In a harbinger of worse to come, the shortfall is projected to further widen to A$184.5 billion in 2020-21, the largest since World War Two as a percentage of gross domestic product (GDP), mainly owing to government stimulus of around A$289 billion.

Despite the largesse, real GDP likely contracted by 7% in the June quarter as the coronavirus-driven lockdowns wreaked havoc on businesses and day-to-day life, sending the economy spiralling into recession for the first time since 1991.

Economic data suggests activity has picked up in the current quarter as anti-virus restrictions have broadly been eased across most of Australia since late May.

However, it will be some time before the economy starts firing on all cylinders, especially as the country’s second most populous state of Victoria is in a lockdown again battling a second wave of infections.

“Recent events in Victoria are…a painful reminder how a setback in combating the virus can impact the speed and the trajectory of our national economic recovery,” Frydenberg said.

The lockdown in Victoria is expected to drag on September quarter GDP by an estimated 0.75%.

“The economic impact from COVID-19 is so far worse than that of World War Two, but what’s more important for markets is retaining momentum in the economy and ensuring the most accommodative business conditions, so that we can keep as many businesses trading through this slump,” said AMP (OTC:) Capital Australian Equities Portfolio Manager Dermot Ryan.

The Treasurer predicted the unemployment rate would rise further to peak at around 9.25% in the fourth quarter from a 22-year high of 7.4% in June, and stay elevated beyond 2020.

The dour outlook was unlikely to hurt Australia’s ‘AAA’ rating on its own, S&P said in a statement, though the threat of a downgrade still loomed large.

“Risks to our rating remain tilted toward the downside as the effects of the COVID-19 pandemic and government responses on the economy, budget, and financial markets evolve,” S&P said.

“We believe that second waves of COVID-19 infections could strike other parts of the country, though other states have been effective in containing the spread so far,” S&P added.

Australia has been able to contain the virus much better than most of it rich world peers, so far reporting over 13,300 coronavirus cases, with more than half in Victoria, and 133 deaths. [nL3N2EU0I6]

Eurovision 2020: Monuments around Europe light up in solidarity during lockdown