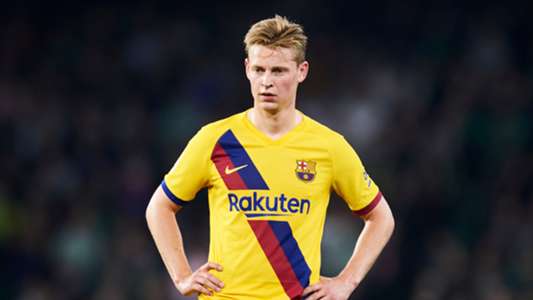 Frenkie de Jong is facing a period on the sidelines after sustaining a muscle injury.

Barcelona confirmed on Sunday that tests have unmasked an injury to the midfielder’s right leg.

De Jong started for the Catalan giants on the return to La Liga action in the 4-0 victory over Mallorca on June 13, but missed the subsequent clash against Leganes and the 0-0 draw against Sevilla on Friday.

The Primera Division leaders are unsure when the 23-year-old Netherlands international will be fit to play again while they wait to see how that he recovers.

“The clinical follow-up on Frenkie De Jong has uncovered an injury in the soleus of his right leg,” a statement on the club’s website read. “The evolution of the injury will condition the player’s availability.”

De Jong joined the Camp Nou outfit from Ajax last summer and has been ever-present in the team this campaign, though the way the club have used him so far has been questioned by Netherlands boss Ronald Koeman, who uses him in a deeper role alongside still another defensive midfielder.

The Netherlands international has made 38 appearances in all competitions this season and missed just three matches so far, chipping in with two goals and two assists.

“De Jong made the best choice because he comprehended that his football is ideal for Spain and Barcelona,” Sneijder said earlier this month. “He did very well to choose Barcelona: it is a club suitable for him, when Messi will stop with football Frenkie will become even more of a leader.”