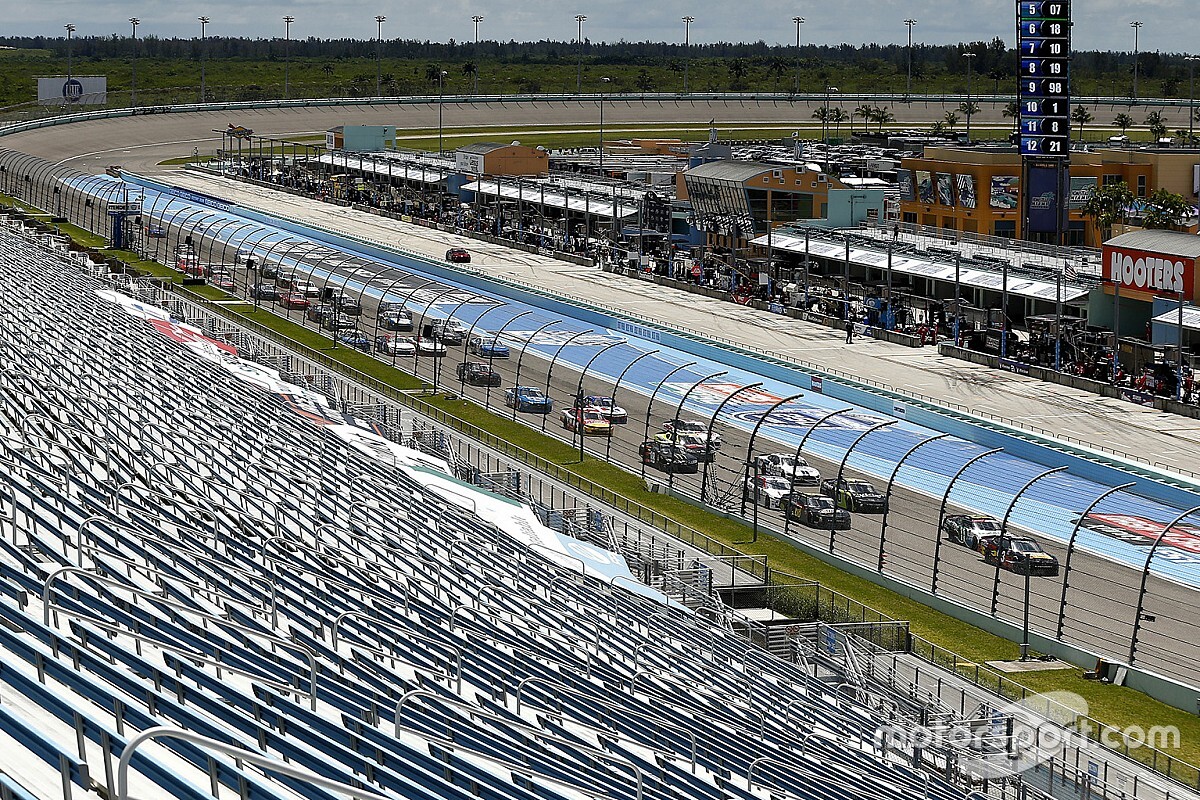 Briscoe was racing without his crew chief, car chief and engineer – all placed on a four-race suspension after his car shed its ballast on the parade lap Saturday. He benefited from the late yellow flag, that wiped out Gragson’s advantage, and used his superior short-run speed to win.

“That was a team win for sure and the caution fell perfect,” said Briscoe, who won his third race of the summer season. “The #9 was definitely better on the long run. We weren’t very good, and we’re looking to win a lot more.”

This was the second leg of the double header as NASCAR makes up for lost Xfinity Series races in the pandemic, as well as had $100,000 at risk for AJ Allmendinger, Gragson, Justin Hayley and Daniel Hemric in the Dash for Cash promotion.

Gragson not merely lost the race, but additionally the $100k payday, as Allmendinger just beat him to the final line in the overtime finish. “It’s unacceptable by my standards, we can’t keep finishing these races in fifth,” said Gragson.

Gragson led Harrison Burton and Briscoe from the green in the last stage, but Austin Cindric regained lost ground from the slow pitstop and surged through to lead on Lap 93. As he showed yesterday, Gragson had the very best long-run car and found comfort in running the high line, reporting: “If I get any further than two inches from the wall, I’m going to wreck. I’m stable right up against the wall, I get a lot of security from it.”

Gragson retook the lead after Cindric smote the wall in Turn 1 with 62 laps to go. Cindric was then forced to pit with a flat right-rear tire, dropping outside the top 20.

Gragson light emitting diode by 4s over Briscoe with 50 laps to go, and he pitted five laps later under green. Gragson’s jackman struggled on the left-hand side, losing him valuable time. After the pitstops cycled through, Cindric light emitting diode Gragson by 4s, but with much fresher tires Gragson was in the catbird seat and reeled him in, retaking the lead with 38 laps to go. Briscoe passed Cindric for second place six laps later.

Briscoe carved into Gragson’s lead since the race drew towards its end, with Briscoe setting it up under a second before getting in the wall at Turn 1. The race looked over, but third-placed Cindric spun in to the wall right before the white flag.

Gragson and Briscoe pitted for tires, with Briscoe beating Gragson out. That led in to the overtime finish, with Briscoe choosing the interior lane for the restart.

Gragson got the original jump on Briscoe at the initial attempt, but Briscoe surged in to the lead, as a multi-car wreck occurred on the back stretch. Allmendinger pushed Riley Herbst, who got sideways and fired into Hemric, who hit the interior wall hard.

At the second attempt, Briscoe just held off Brandon Jones, with Ross Chastain surging around third, and Gragson falling to fifth. Briscoe won it from Jones, Chastain, Allmendinger (who started the race from the back) and Gragson.

Gragson triumphed in the second stage, his fifth segment win of the year, finishing well free from Cindric after some fantastic racing in a long run under the green flag.

Chastain started stage two from the leading, having pitted for fresh tires ahead of the stage break and didn’t pit under yellow, but he couldn’t stop Jones from sliding underneath him to grab the lead instantly. Cindric blew past Jones on the trunk stretch to take the lead 10 laps in.

As Cindric pulled clear, an epic battle unfolded behind him, sometimes running three to four wide. Gragson eventually arrived on the scene on top of that, and chased down Cindric, passing him for the lead with 14 laps to go.

Ryan Sieg won the opening stage, repeating his aggressive strategy of taking fresh tires at your competition caution at the halfway point.

The starting grid was flipped from the Top 15 finishing order from Saturday’s race. Myatt Snider led from pole, with the inversed grid promoting some intense racing in early stages. Chastain was typically aggressive and hit the lead by lap two. Briscoe was quickly on his tail, while Cindric took his time and energy to elevate himself into the top three however it soon became a three-way fight in front.

As the long term wore on, Jones moved up to third before the competition caution on Lap 20.

Cindric led at the restart, ahead of Jones and Burton. But Sieg had repeated his trick from Saturday, and taken fresh tires, which allowed him to surge from 22nd to perform second once the caution flag flew again for Tommy Joe Martins and Caesar Bacarella, who wrecked on the entry to Turn 3.

At the restart, Sieg used his fresher tires to claim the third stage win of his career, ahead of Annett (who had pitted for tires underneath the second caution and rallied from 31st), Cindric, Jones, Allgaier and Gragson.

But Sieg lost all his track position when Allgaier hit the right-rear wheel out of his tire changer’s hands in the following pitstops. Allgaier then got blocked into his pit stall, so every one lost because deal.

please maintain out of election