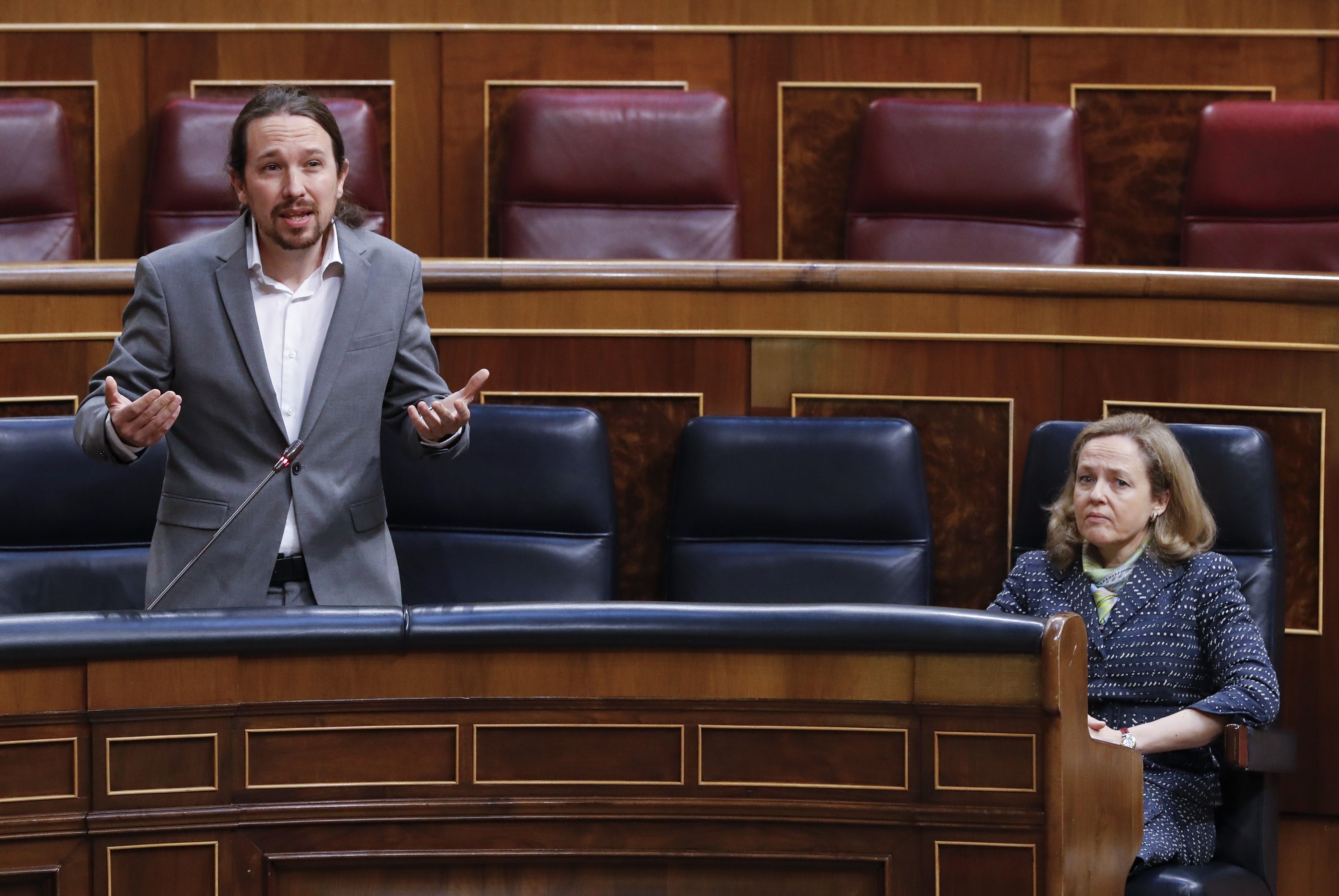 The first relevant session of the parliamentary commission for economic reconstruction ended on Thursday with a formidable political row in Congress. And he left an appetizer of the clash looming between the two economic souls of the Government. Vice President Pablo Iglesias demanded investments and “a new reconstruction rate”: a tax on large estates. Vice President Nadia Calviño also announced an “investment and reform” plan, called for a more progressive fiscal framework but overlooked that figure. And he added: “Fiscal responsibility and investor confidence are also keys to recovery.” Those two conflicting visions have to crystallize in a Budget on which the duration of the legislature depends.

Spain has half a dozen major problems. It was one of the countries hardest hit by the Great Recession, after the bursting of a bubble that left deep scars. He never knew how to solve the formidable hole in the job market. He arrived at the Great Reclusion without fiscal muscle, after neither Rajoy nor Sánchez did their homework. It has suffered the ravages of the pandemic like few others. And a bump in terms of GDP and unemployment awaits: hibernation has caused a sensational destruction in the automotive, tourism and commerce, three of the great engines. The economic winter, in short, will be long. The parliamentary reconstruction commission faced a fundamental session to begin to know where the shots go with the presentations of two vice-presidents, Pablo Iglesias and Nadia Calviño. But there is nothing like the spirit of the Pacts of La Moncloa in sight in Congress: the deputies caught the unbearably harsh tone of Spanish politics, between insults from “coup plotters” and “arsonists” from right to left and from left to the right. When the outbursts gave way to debate, there was not the slightest consensus either: not even between the two parties of the coalition. Calviño and Iglesias clashed over fiscal policy, the great battle that is coming: there can be no legislature without budgets for the economic shock that is coming upon us. And lighting those budgets will not be easy, due to the two economic souls of the Executive and the difficulties in forging majorities.

The pulse between the economic policy of the PSOE and the agenda of Unidas Podemos comes from far away. At the beginning of the Great Reclusion, there was a first shock due to protection policies, and in particular due to the scope of the temporary employment regulation files (ERTE). That disagreement ended reasonably well. The second encounter was for the minimum vital income, which will be resolved today in the Council of Ministers: once again passed test. Then came the sainete of the repeal of the labor reform: the Executive left many hairs there in the cat flap after agreeing with Bildu. Calviño and Iglesias opened a fourth melon, the taxes and, therefore, the Budget. The diagnosis is similar: “The Spanish tax burden is seven and a half points below the euro average [80.000 millones al año menos de ingresos]; We must rebuild tax justice, “said Iglesias. “We must strengthen public revenues with a tax framework,” said Calviño. The coincidences end right there.

Iglesias presented himself in Congress with a clearly Keynesian speech: from the crisis of 2008, “everyone’s resources were used to rescue a minority of privileged people”, with inequality through the roof, an unprecedented precariousness of working conditions and a string of cuts – “7,000 million in public health” -. The Podemos leader is now demanding “a different way out.” He stressed that there is “a very broad consensus for expansionary policies” and that the key to recovery is “public investment”. To pay for all of this, instead of cutting, he proposes “ending the privileges of large companies and the financial sector, which contribute less than their share”, and “rebuilding the tax system.” Iglesias struck again with the idea of ​​a tax on large fortunes, “a reconstruction tax so that those who have the most put their shoulders on it.”

That new tax, according to their accounts, would allow them to raise 11,000 million. But Iglesias made it clear that this is the idea of ​​Podemos: it is not a plan shared by the entire government.

Just a couple of hours later Calviño gave a speech with similar music, but quite different lyrics; with another emphasis. He pointed out that confinement has caused a deep drop in GDP, which is around 10% for this year. He ventured that the worst may have already happened, and announced that the Government has ready “an investment and reform plan”, to be combined with the Recovery Fund of 750,000 million that Brussels has just proposed. So far no great differences are detected with Churches. But Calviño openly disagrees both on the need to repeal the labor reform and on fiscal policy to get out of the crisis: he did not want to enter at any time – despite repeated questions – in the tax on high incomes that Iglesias proposes. He spoke of “a solid tax system, appropriate to the welfare state that we want and that addresses the income gap with the European average”, but limited tax increases to Google rate (about digital companies) and the Tobin rate (financial transactions). In La Moncloa, they also do not believe that now is the time for that fiscal figure, according to the sources consulted: on the socialist flank of the Council of Ministers, only José Luis Escrivá could approach, at any given moment, this measure.

Calviño’s emphasis is on limiting economic damage while the acute phase of the pandemic lasts, in order to “have firm foundations for recovery.” And it involves undertaking investments and expansive fiscal policies with the help of European funds at that time. But, unlike Iglesias and in parallel to the Bank of Spain, the economic vice president always manages another key in her speeches: “Fiscal responsibility and investor confidence are also part of the ingredients necessary for recovery,” he said in the Congress. The stimuli will leave a deficit of 10% and a public debt of 115% of GDP, numbers more typical of a war than a pandemic. “Debt is a burden on future generations. We cannot forget the reforms to have a sustainable recovery ”, he closed in the purest style of his years in Brussels.

Central bankers often say that “you have to sound like a hawk to be a pigeon”: the ability to pass stimuli depends on the fiscal credibility of a country. Calviño plays that trick in that fight; Iglesias, clearly that of stimuli. The differences between the two will be settled in the Budgets: Spain is risking everything in the 2021 accounts. Without them there can be no more legislature; with them Sánchez can lengthen as long as he wants. It only remains to agree on them in the Council of Ministers. And then assemble a majority that approves them in Congress. Nothing less.

In EL PAÍS, dozens of journalists work to bring you the most rigorous information and fulfill your public service mission. If you want to support our journalism and enjoy unlimited access, you can do it here for € 1 the first month and € 10 the following month, with no commitment to stay.