Home Trend Calviño is shaping up to chair the Eurogroup if he leaves office... 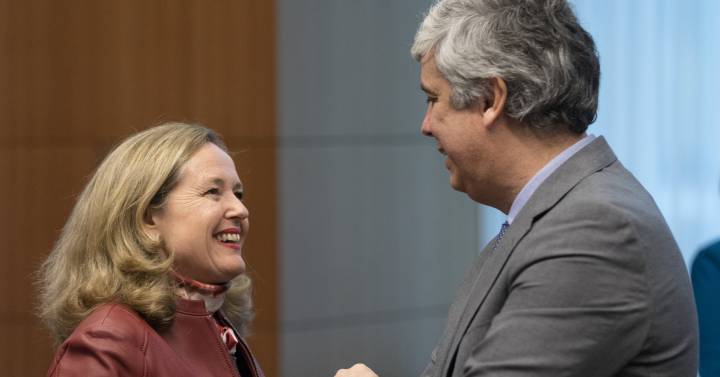 Vice President for Economic Affairs, Nadia Calviño, is emerging as a clear favorite to chair the Eurogroup, the meeting of ministers of Economy and Finance of the 19 euro countries. The appointment will be resolved before July and the position would be compatible with that of head of the Economy. In other words, Calviño would not abandon the Pedro Sánchez Executive. However, it all depends on what the current president does, the Portuguese Minister of Economy, Mário Centeno, who has not yet ruled on whether he will leave the post.

“I always say that all the measurements are fantastic. But then there are those that can really be paid for, ”Centeno declared on a visit to Madrid in May last year. With this attitude, the Portuguese has always earned the respect of his European peers. In fact, in December 2017 he became president of the Eurogroup despite being a member of a left-wing government supported by the communists. In a difficult balancing act, Centeno has managed to balance social policies with fiscal responsibility. Calviño aspires to display the same pragmatism to take the witness of the Portuguese in quite similar conditions. He has six months ahead in which he will have to beat the copper inside and outside to earn the position. It is already among the favorites.

This race will begin in part with Centeno’s permission. In public, the Portuguese has explained that he will announce if it continues shortly before the time when the body’s presidency has to be agreed, back in May or June. But in Brussels and central bank circles there is already talk that he could head towards the central bank of Portugal in the middle of the year, where he was already director of studies and the current governor has just finished his term. Only, as some sources explain, it is still not clear that the Prime Minister of Portugal, António Costa, wants to do without him.

If Centeno tries to stay, it would complicate Calviño’s chances. Evicting the one who is already in the position is always more difficult. Even if there is a certain discontent with Centeno’s management, especially among the Germans. Criticism has abounded for seeing it as inconclusive, not organizing the meetings enough, and being clearly in favor of measures that Berlin did not support.

In the event that Centeno does not continue, the chances that Calviño will rise with the chair are very high. Her status as a woman and a socialist would help a lot. The socialist family has lost positions in Europe and demands to recover a quota. In recent years, the Eurogroup has been reserved for the socialist group within the institutional division.

In addition, Calviño would have the approval of the Germans. Despite his friendly and conciliatory nature, Centeno has recently traveled to the capitals to discuss issues in advance, the German newspaper recently criticized. Handelsblatt. In clear contrast, Calviño has stood out for his organizational skills and his ability to work. Amen that you know the topics in detail. To the point that Centeno has often relied on the Spanish minister as a mounter to close and draft agreements. She is endorsed by her experience as a high official of the European Commission.

And the German vice chancellor and finance minister, the socialist Olof Scholz, would offer his support to Calviño. Periodically they meet before the Eurogroups with the rest of the socialist ministers and maintain a good relationship, say diplomatic sources.

So Calviño would be the natural successor to Centeno. The rest of the possible candidates have more disadvantages. French Minister Bruno Le Maire could choose. However, it seems very difficult for one of the two large countries to be allowed to control the Eurogroup. Already tried by the then German Minister of Finance, Wolfgang Schäuble. But it was deemed excessive and the way was blocked. To top it all, France already has the ECB. And Italy has the European Commissioner for Economic Affairs, Paolo Gentiloni.

Irish Paschal Donohoe could apply. However, he is against the fact that he belongs to the popular Europeans, his position depends on upcoming elections and he has resisted the fiscal harmonization that the Commission advocates. And the Luxembourgish Pierre Gramegna belongs to the liberals.

In short, it looks good for Calviño whenever he leaves the Centeno position. Even so, in these months he will have to demonstrate that he embodies the spirit of Centeno and that Spain adheres to fiscal discipline despite being in an Executive with United We Can. Your public deficit numbers will be important. A labor counter-reform could penalize her, although less. As a drawback it appears that the Spanish Government can be considered somewhat unstable. Also that the technical president of the Eurogroup, the Dutch Hans Vijlbrief, a hawk who acted as a counterweight to the south and who will have to find a replacement to appease the concerns of the northern countries.

Pelosi Invites Trump to Give State of the Union Address