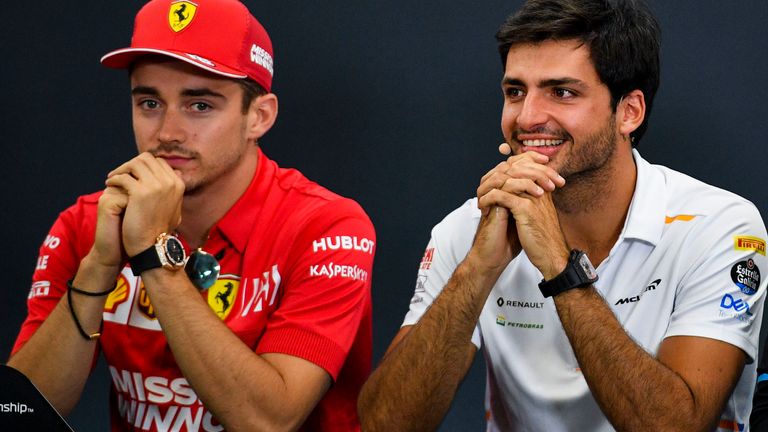 “Without them, the Ferrari opportunity wouldn’t come,” Sainz praises McLaren ahead of Ferrari move as he prepares for F1 2020

Carlos Sainz insists he can be “fully committed” to McLaren in 2020 as that he bids to finish on a high before making his big Formula 1 move to Ferrari.

During the sport’s unexpected break, Sainz was confirmed as Sebastian Vettel’s replacement at Ferrari for 2021 – meaning he can have an entire season with current team McLaren before joining a rival.

But with McLaren giving him their blessing, and Sainz keen to repay the faith shown in him in his sole season with the team this past year, the Spaniard told Sky F1’s Natalie Pinkham he will be giving it his all.

“I think it’s going to be a smooth transition, very easy going,” Sainz said on the In The Pink podcast.

“Everyone at McLaren can be 100 per cent sure until the last lap of the last race, I’m going to be described as a McLaren driver pushing flat-out and being fully centered on the McLaren job.

“When that’s over I will concentrate on Ferrari, but I do not want a very important factor to hinder the other. I’m fully committed to this project, to this team, I want to finish on a high and I’m going to give my best possible.

“Then there will be time to start thinking about the next season with Ferrari, which for sure will have its challenges, it’s not going to be easy at all, but at least I need to try and finish on a high with McLaren.”

The first race of the season happens this week-end, with the Austrian GP live and exclusive on Sky Sports F1.

Sainz’s journey to one of motorsport’s most coveted seats wasn’t plain sailing, with stints with Toro Rosso and Renault before joining McLaren. But it’s in Woking where that he found his best form.

“They are extremely special people [at McLaren], essential people in my own career, because without them the Ferrari opportunity wouldn’t come,” Sainz explained.

“In McLaren I think I’ve managed to be best version of myself.”

Listen to the total podcast to hear Sainz on many topics, including on his “positive nerves” in front of the first race of F1 2020, his bond with Fernando Alonso and Lando Norris, and even more.

‘Haaland was a small guy… he got injured and came back big as f*ck!’...