Home World Countries once praised for their handling of coronavirus are struggling to deal... 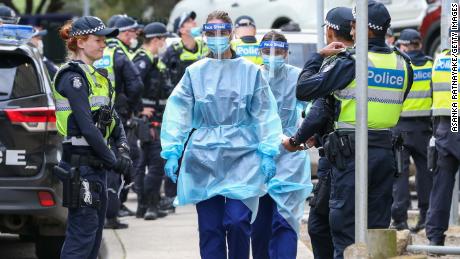 The renewed outbreaks serve as a stark warning to global leaders of how quickly an apparent success story can unravel.

Just a few months ago, Australia was being lauded for its pandemic response.

Like the US, it closed its borders to foreign visitors who had recently been in China. As the virus spread, the government on March 19 closed its borders to all non-citizens and non-residents. Stricter curbs on social gatherings, expanded testing, and restaurant and bar closures followed as cases rose, with some states sealing their borders.

For a while, the outbreak was considered broadly under control.

On May 8, Australian Prime Minister Scott Morrison announced plans to reopen the country by July, as the government began winding down social distancing measures. At the time, Australia’s case count stood at almost 7,000, with 97 fatalities.

But Covid-19 cases in the state of Victoria have spiked in recent weeks. The state recorded 671 new cases in a single day on Saturday, prompting state premier Daniel Andrews to declare a “state of disaster” on Sunday.

Thirteen new deaths were announced on Monday, bringing Victoria’s total to 136, and a total of 11,937 confirmed infections, according to the state’s chief health officer, Professor Brett Sutton.

The border between Victoria and New South Wales –…