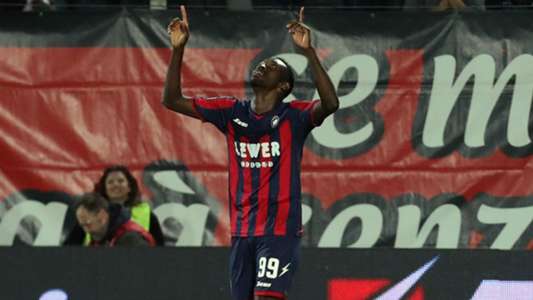 Simy took his goal tally to 18 for the season as Crotone secured a 1-0 win over Pordenone to keep their Serie A promotion hopes in check.

The Pythagoreans have been in solid form since the resumption of the league, going unbeaten in all games which stretches back to February since a 3-2 loss at Juve Stabia.

Simy has been a catalyst for much of the Calabria outfit’s performances, scoring a hat-trick in a 3-0 win over leaders Benevento before netting in the last game away to Cittadella which ended in a 3-1 win.

He made it five goals in three games by using his 198cm height to head the ball in from a cross by Salvatore Molina just before the half-time break.

The 28-year old Nigeria international played for 89 minutes and his goal was his only shot on target but was 100% successful in his dribble attempts (two from two) while also having 40 touches and 19 accurate passes from 26 at (73%).

Simy won seven of 13 total duels and made four clearances and one tackle.

His goal takes him level with Pietro Iemmello of Perugia who drew a blank in their 2-1 defeat at Cosenza.

Simy’s closest challengers for the Golden Boot are Stefano Pettinari and Francesco Forte of Trapani and Juve Stabia with 17 and 16 goals respectively.

The former Gil Vicente forward has previously admitted he is not focused on winning the top scorer award but rather on securing promotion to the Serie A of which Crotone still occupy the final automatic promotion spot of second, 16 points behind Benevento whose top-flight fate has been sealed.

Crotone are now unbeaten in 10 league games (seven wins, three draws), Simy scoring in six of them. They wrap up their season against Salernitana (home), Livorno (away), Frosinone (home) and Trapani (away).

The Pythagoreans were last in the Serie A during the 2017/18 campaign, Simy’s second season at the club, finishing in 18th place, three points shy of safety.

‘Cats’ review: With stars like Taylor Swift, the film is still a memory that’s...

A Complete Guide in Finding the Right Career Path for You — CareerMetis.com