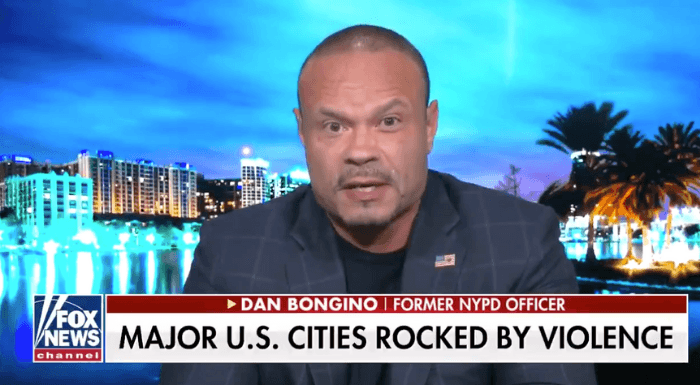 On Tuesday, conservative pundit Dan Bongino blasted Democrat mayors’ attempts to blame violence over the Fourth of July weekend on COVID-19 and President Trump as “grotesque and pathetic.”

Watch: @dbongino blasts NY Mayor over violence: ‘For the Liberals it is time to seriously look in the mirror. It is not President Trump that did this, it is that guy in City Hall, Bill de Blasio, your communist Mayor, who has failed you.” pic.twitter.com/k7iaSC2oIG

Both Democrat-led cities saw the amount of violent crime go up notably during the holiday weekend. 87 people shot and 17 killed from July 2 to July 5, in line with the Chicago Police Department, in addition to at least 44 shooting incidents and 10 dead in New York City.

“I heard Mayor Lightfoot in Chicago also trying to pin this on Donald Trump somehow,” Bongino said. “How this was Donald Trump.”

“And again, it was racist, of course, he continued. “Everything is racist. God forbid you call out the fact that young black children are being shot in the head…that you call that out.”

Lightfoot recently taken care of immediately a letter from Trump that criticized her leadership by concentrating on other problems, like healthcare, affordable housing, and the President’s supposed “demonizing” of the LGBT community.

“I will always honor the Office of the President, but please do not ask me to honor this occupant because I do not,” Lightfoot said.

Get out of NY before you get hurt, or God forbid, worse. It’s planning to get worse there very soon. https://t.co/Q45t3LhCGt

“Let me just say something here,” Bongino said. “So, yesterday evening I was going on Sean Hannity’s show. And, right before I was on the show [I was] performing a bit of homework and I’m scrolling through social media.”

“I’m trying to get the body count for New York this weekend,” he continued. “This is not hyperbole. I’m not exaggerating because I want to be precise.”

“And, as I’m on the air — right [as I am] going to go on, I see one more thing at The Daily Caller about another 14-year-old who was shot,” that he continued.

Bongino thundered, “That’s a human being who was killed and that’s how we have to talk about on television now what’s going on in the cities run by these two epic failures of mayors: Mayor Lightfoot and Mayor De Blasio.”

RELATED: Bongino Slams Release Of Violent Prisoners Due To Coronavirus

Bongino: ‘It’s not President Trump that did this’

“That if you don’t go on and check your Twitter feed before you come on there may be someone else dead you may have missed?” Bongino said. “These aren’t rounding errors. These are people. These are people’s kids.”

“So again, for all the liberals listening, it may be a time to seriously look in the mirror,” he said.

“It’s not President Trump that did this. It’s that guy in City Hall, Bill de Blasio — your Communist mayor who has failed you and  — as I said on this program and others, repeatedly for years now —  people will die because of the arguments going on over public safety,” Bongino said.

“And, tragically, I was correct,” he finished.

Drones being repurposed to spray disinfectant over villages and cities in China hit by...

US coronavirus deaths projected to reach 180,000 by October