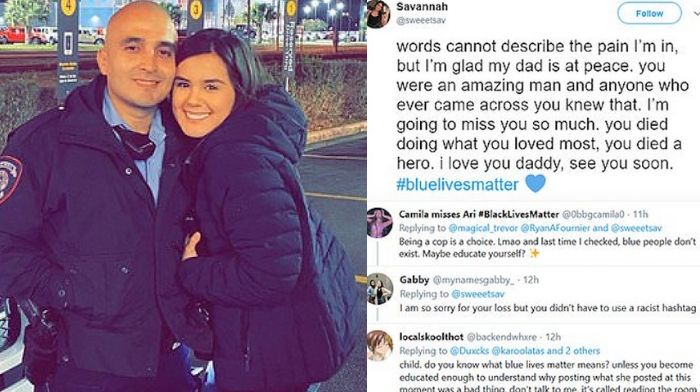 On Saturday, two Texas police officers were tragically gunned down while responding to a domestic violence call. Afterwards, something truly sickening happened when one of the fallen officer’s daughters was attacked online simply for using the hashtag #BlueLivesMatter to honor her father.

Officers Edelmiro Garza, Jr., 45, and Ismael Chavez, 39, of the McAllen Police Department were killed after being ambushed on Saturday. Chavez was a former chemistry teacher and football coach who had a young daughter named Savannah.

After her father was killed, Savannah took to Twitter to pay tribute to him.

I’m so proud of you and all your accomplishments and I’m proud to call you my father. i can’t thank you enough for all you’ve done. I thank God for putting you in my life. you will forever be in my heart. thank you for making me the happiest “princess” ever. #McallenPD pic.twitter.com/aFXsb4b4rD

The tweet from Savannah that received the most attention was one in which she wrote, “words cannot describe the pain I’m in, but I’m glad my dad is at peace. you were an amazing man and anyone who ever came across you knew that. I’m going to miss you so much. you died doing what you loved most, you died a hero. i love you daddy, see you soon. #BlueLivesMatter.”

This tweet should not be controversial at all, but that is unfortunately not the world that we live in right now. Savannah learned this the hard way when she was quickly inundated with hate over her use of the hashtag #BlueLivesMatter by Twitter users who showed no mercy despite the fact that this young woman had just lost her father.

“I am so sorry for your loss but you didn’t have to use a racist hashtag,” one Twitter user commented, according to Heavy.com. Another social media user added, “Blue lives matter was literally created in response to and to undermine black lives matter. There’s no other connotation unfortunately.”

Savannah quickly deleted the tweet, but that did not stop the negative comments from escalating.

“Well atleast your pops is a good cop now, 6 feet in the dirt where he cant hurt nobody,” a third Twitter user wrote, with a fourth saying, “Rip to your daddy!!! But one cop down many more to go,”

Tons of Twitter users fired back at Savannah with the hashtag “ACAB,” which means “All Cops Are Bastards.”

it makes me absolutely sick how divided this country has become pic.twitter.com/OChbymldRh

Anti-police sentiments have been at an all-time high in the United States ever since the death of George Floyd back in May. What Twitter users did to this poor young woman after she received the worst news of her life shows exactly why police officers need our support now more than ever.

This piece was written by James Samson on July 14, 2020. It originally appeared in LifeZette and is used by permission.

Read more at LifeZette:
Goya Foods sales take off after liberal boycott
Five Guys employees refuse to serve Alabama cops: End up getting fired
Black singer ‘Lady A’ eviscerates Lady Antebellum for using their white privilege to sue her over her name