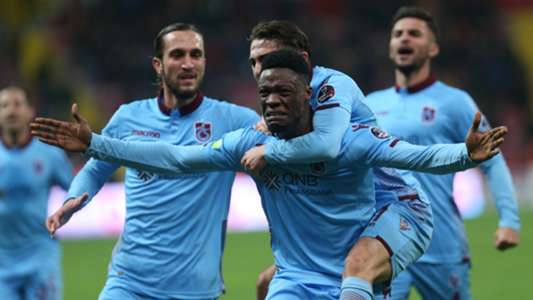 With Istanbul Basaksehir losing 2-1 at Konyaspor, the Black Sea Storm needed an away win to keep title hopes alive. However, they faltered at the Denizli Ataturk Stadium despite taking an early lead.

That goal woke the hosts from their slumber but they were wasteful in front of goal, thus, went into the half-time break with a goal deficit.

Notwithstanding, the levelled scores a minute into the second-half through Mali international Hadi Sacko who put that ball past goalkeeper Ugurcan Cakir. That strike was the winger’s first in 2020 and third in his maiden season at Denizlispor – a team he joined from Leeds United, albeit, completing loan moves Las Palmas and Ankaragucu.

Just like Morocco’s Manuel da Costa, Ekuban saw every minute of action but was cautioned in the 90th minute, while on-loan Stoke City midfielder Badou Ndiaye was introduced for Jose Sosa in the 69th minute. Nigeria’s Anthony Nwakaeme was not listed for the game by Cimsir.

For Denizlispor, Ogenyi Onazi was brought in for Radoslaw Murawski in the 46th minute while Sacko made way for Olcay Sahan with 12 minutes left to play.

Morocco’s Ismail Aissati was handed a starter’s role and came out for Cameroon’s Kibong Mbamba in the first minute of additional time. Ghana’s Isaac Sackey saw every minute of action but that was not the case for Gambia’s Modou Barrow who was not listed by caretaker manager Levent Kartop.

With two matches left, Trabzonspor trail leader Istanbul Basaksehir by four points who need to defeat Kayserispor on Saturday to be crowned as Super Lig kings for the first time in their 30-year history.

Nwakaeme’s Trabzonspor arrived as title challengers well ahead of schedule and now must ensure they tie up a top-two finish to bag an automatic spot in the Champions League next season.

Rachel Lindsay Breaks Down The Exact Conversation She Had With Hannah Brown About The...