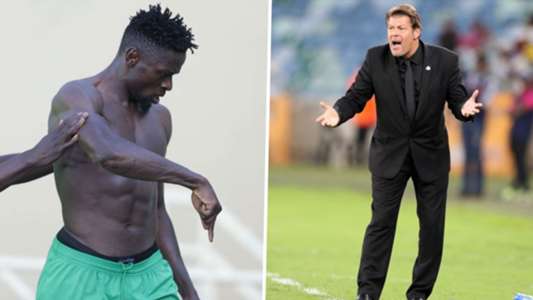 Young Africans coach (Yanga SC) coach Luc Eymael has confessed he has now run out of ideas on how to help under-fire striker Gnamien Yikpe.

The towering striker was signed by the Jangwani Street-based giants in January from Kenyan champions Gor Mahia, after penning a two-year contract, but he has failed to live up to expectations and has so far scored just one goal for the team.

On Sunday, after Yanga secured a 0-0 draw against Azam FC, the club’s fans stormed outside the team’s dressing room, calling for the release of Ivorian striker, whom they accused of letting down the team.

A poor performance in the 1-0 win against Mwadui – where he missed one gilt-edged chance – and another lacklustre display in the goalless draw against Azam, forced the fans to call for the management to do away with the burly striker.

The Belgian coach has now exclusively told Goal he has done all he could to help the player and does not have any remaining options.

“Now about Yikpe, it is a terrible problem, he is so good in training sessions but he is not repeating this good style in-game time, then is a big problem and I give him so many times a chance and now the fans are there, they are on his neck, and it will be worse and it is for sure for now it will be difficult to give him playing time,” Eymael told Goal on Tuesday.

“But fans have to know, I am not the one who signed Yikpe, fans should know we don’t have the real solution for a striker, if we had one top striker, one of the strikers that I recommended to the club, we should have scored more than 15 or 20 goals by now, fans should know that I have recommended top strikers but until now the situation is the same.

“But until now we are just waiting for the decision from the stakeholders who are taking decision for signing new players, the coach can only recommend and the work of management is to sign, the only player I recommended for the club is Bernard [Morrison] and you can see the job he is doing for the club.

“But I think since the beginning the fans did not appreciate Yikpe and I even told the club you signed Yikpe before I came, I asked them if you know you did a mistake, what do you do?

“You need to sit down with the player and agree if whether to terminate the contract on a mutual agreement because when the coach looks at the player in training sessions, he is scoring goals but when given the chance in a really match he doesn’t.

“The fans are on the neck of Yikpe, why because they are not attacking the people who signed, him, and I can tell you Yikpe is very perfect during training sessions, he is his doing very well and even scores goals, but on the pitch, he is not doing the same, because he has a psychological problem, he has an issue.”

Yanga are preparing to face Ndanda FC in a league contest on Saturday.

The BBC is nearly 100 years old. Will it survive the next decade?

Liverpool Still Has a Long Way to Go

Ron Rivera gets his defensive cornerstone