Home Trend From victims to victimizers: the chains of sexual abuse in the Legionaries... 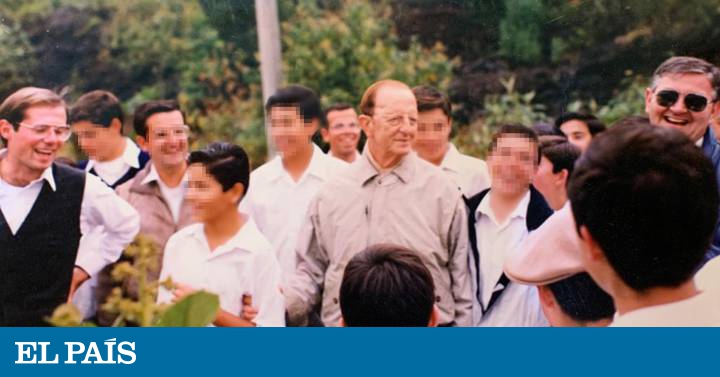 In May 2019, when Ana Lucía Salazar publicly denounced the Mexican priest Fernando Martínez for having abused her at a Legionaries of Christ school in Cancun, she still did not know that he had also been a victim of abuse. Two months earlier, when Italian justice sentenced former Mexican priest Vladimir Reséndiz for abusing two children, some of his former colleagues from the Legion learned that, before being a victimizer, he had been the victim of abuse. “It is part of the Legion’s methodology: prepare for abuse, abuse yourself and become an accomplice,” says Erick Escobar, a former legionary who left that movement to start a fight against cases of pedophilia.

In late December, the Legion of Christ, one of the most powerful congregations in the Catholic Church, surprised the world when it released a report admitting 175 cases of child abuse within the order founded by the Mexican priest Marcial Maciel in 1941, most of them committed by their own founder and from the very moment of the foundation. However, what was most revealing was not the verification of the vexations that had been denounced by different victims over the course of eight decades, but rather what the report hinted at: that pedophilia within the Legion was not the result of the perversion of some priests, but part of a foundational dynamic that reached all levels and guaranteed spaces of power for those willing to participate or remain silent.

“It is emblematic that 111 of the abused minors were victims of Maciel, one of his victims or a victim of his victims,” ​​says the Legion report, which explicitly speaks of “chains of abuse.” In order to understand the links in these chains that go back mostly to the founder, ex-Legislator Escobar talks about the victims of abuse in terms of generations. “There are victims of the first generation, of the second and of the third,” he says.

José Antonio Pérez Olvera, an 80-year-old Mexican lawyer who was among the first legionaries to openly denounce Maciel (in 1997), explains that those who had been abused by him used to be awarded with positions of power. “There was a common characteristic to those victims of Maciel who did not speak, and that was that he put them as superiors of the houses or seminaries of the Legion,” he says. That was the case of Fernando Martínez, whom Pérez Olvera remembers for the “excessive” abuses he suffered at the hands of the founder of the order during the 1950s at a seminary in Rome.

Martínez was a victim and became a victimizer. The accusations of child abuse that he accumulated throughout his career within the Legion (an internal investigation recognizes at least three complaints between 1969 and 1990 in different parts of Mexico, one of them for abusing a child between four and six years old) they did not prevent him from continuing to hold positions of power. His last position was at the Cumbres Institute in Cancun, where he was appointed director in 1991. Two years later, the Legion transferred him to Salamanca, in Spain, after some mothers accused him of abusing their daughters.

“There was a characteristic common to Maciel’s victims: he put them as superiors of the houses or seminaries of the Legion”

“They knew that if they raped, nothing happened to them because they had the support of the entire institution,” explains Ana Lucía Salazar, a 36-year-old Mexican radio presenter, who in May of last year, almost three decades after the events. , reported on networks that she had been abused by Martínez when she was a student at the Cumbres Institute in Cancun. His accusation uncovered the case publicly, which until then had been handled internally in the congregation. When he tweeted the priest’s name and photo, Salazar learned from former colleagues in Martinez that he had been too victim of child abuse. “I am being abused by someone who has been abused by Maciel,” he said. “That figure in one of the letters of the first whistleblowers. They are victims of the 1940s, we of the 1990s. ”

The Mexican psychologist Amaya Torre, specialized in sexual abuse, explains that child abuse can be transgenerational, especially when it occurs under certain conditions. “It is repeated from generation to generation because the adult is abused, they did not care for him and he does not know how to care for others,” he says. Among the factors that lead to the reproduction of this behavior, the “great cancer” is the secret, silence, assures: “If it is not spoken, the victim normalizes it, believes that this is how the world works and when it grows it does the same thing”. This is how the world literally functioned within the Legion, which until a few years ago forced its members to make vows in which they promised to “never criticize government acts or the person of any director or superior by word of mouth. , written or any other means ”, as explained by the sociologist specialized in religions Bernardo Barranco in an article published in 2007.

The rupture of this silence in recent years has allowed ex-legislators to unravel the chains of abuse and complicity within the congregation. That happened in March last year, when Italian justice sentenced Mexican priest Vladimir Reséndiz to seven years in prison for abusing two children. Cristian Borgoño, an ex-legionary who was ordained a priest with him, remembers that after the sentence some former colleagues told him that Reséndiz had also been the victim of abuse by a superior when he studied at the Adjco seminary in Mexico City, a early nineties.

Burgundy is one of the founders of Legioleaks, a Facebook group created by ex-legislators to denounce cases of sexual abuse within the congregation and discuss clerical pedophilia. Borgoño attributed the abuses that Reséndiz had suffered to the Spanish priest José María Sabín, who was rector for 17 years of the Anahuac Mayab University of Yucatan, one of the institutions of the extensive educational network of the congregation, and that in late 2014 he suddenly announced that he left the Legion of Christ and the priesthood and returned to his native Spain without giving reasons.

The explanation may perhaps be found in the justice of another country. In 2016, a former seminarian filed a sexual abuse lawsuit in the United States against José María Sabín, Marcial Maciel and Luis Garza Medina, a Mexican priest who was considered Maciel’s right-hand man and architect of the powerful financial structure of the Legion of Christ. The abuse reported in the US lawsuit, to which EL PAÍS had access, is located in the same scenario and at the same time that Reséndiz would have been abused, according to his former colleagues: the Adjco seminar at the beginning of the decade of the nineties. According to the document, before going to court, the plaintiff reported what happened to the Legion in 2014: the same year that Sabín left everything and went to his country. The Legionaries were consulted by this newspaper about the complaints against their former and current members, but did not respond to the request.

On Wednesday, January 8, Italian justice confirmed the sentence against former Mexican Legislator Vladimir Reséndiz for abusing two minors in 2008, when he was director of a Legion of Christ seminary in northern Italy. “When an abused priest has a position of power, he repeats the same pattern and abuses those who are in charge as his superiors abused him,” says Escobar while reviewing the faces of seminarians in old photographs. “In the Legion they prepare you to be abused.”

Every night, when the lights of the Ajusco seminary in Mexico City were turned off, Bernardo — a fictitious name — remembers that Father Antonio Rodríguez Sánchez was walking among the teenagers’ beds. After a few laps, with a brush on his head, he indicated to the chosen one to follow him to his room. Bernardo saw everything from his bed but did not know what happened next, until the night he felt his head touched. It was 1996 and he was 12 years old when the rector of the institute abused him, according to the scene he describes in a complaint he sent to the authorities of the Mexican Church last December, to which EL PAÍS has had access.

The memory of that night followed him to Salamanca, in Spain, where he continued his studies. There, according to his complaint, he revealed what had happened to his superior, the then-novice William Brock, but what he received in return was a ticket to Mexico and $ 100: the legionaries removed him from the order and sent him from return.

The anger of some victims at the report released by the Legion of Christ in December, which they consider insufficient and an attempt to facelift, has unleashed a barrage of new complaints – such as that of Bernardo – that are reaching the Nunciature, according to The Vatican’s representative in Mexico, Franco Coppola, confirmed to this newspaper. The names of Rodríguez Sánchez and Brock, according to Coppola, are two of a list of priests to investigate. The complainant Bernardo has made details later, in which he indicated that the abuse of which he was a victim occurred in the mid-1980s, and that Brock was a superior of humanists.