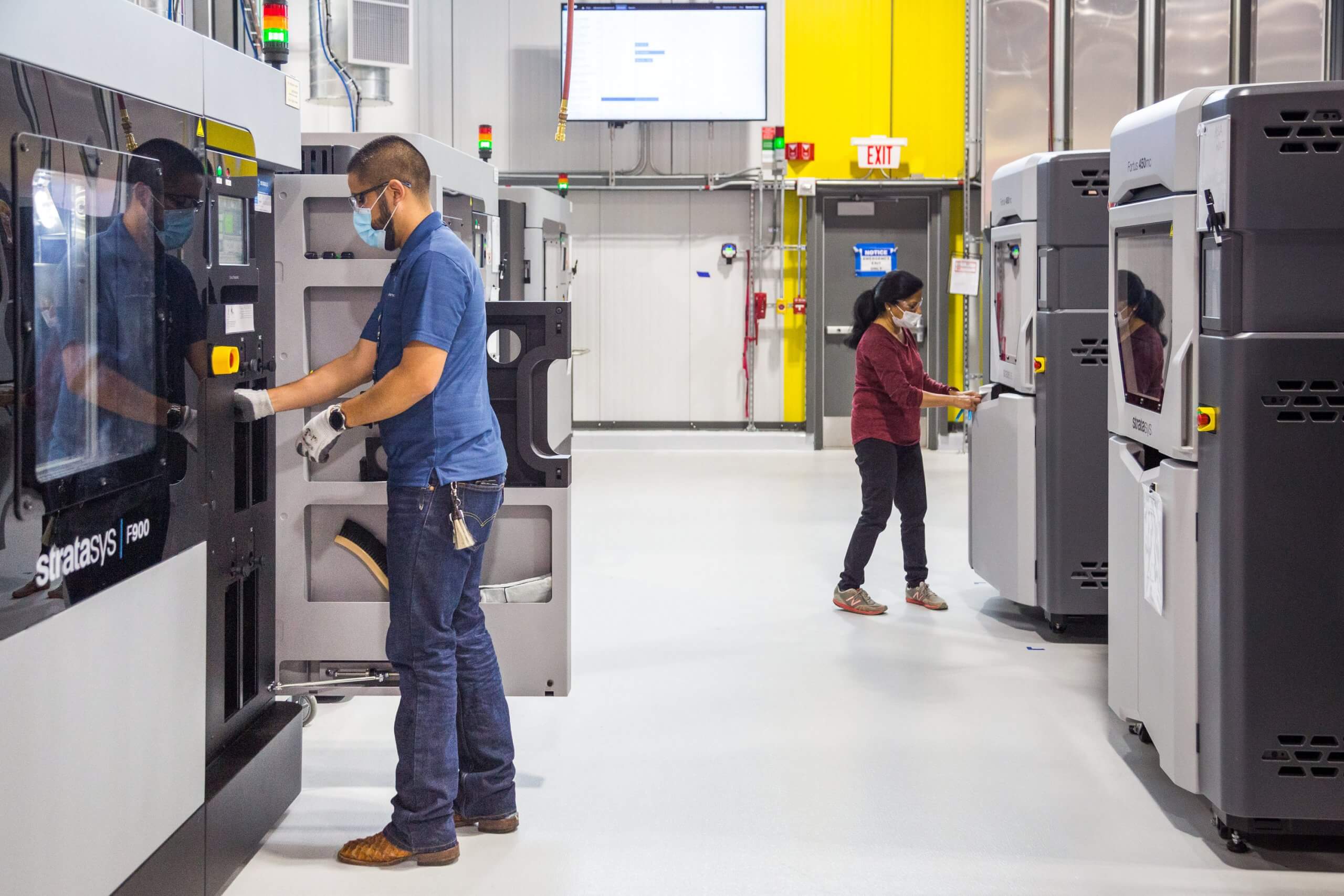 General Motors (GM) relies on 3D printing day-to-day to help launch new vehicles – it has been doing so since 1989, and the first time a physical version of its new mid-engine Corvette came together, 75% of parts were produced using additive manufacturing.

“3D printing helps us design and build parts and products faster and in ways we previously couldn’t,” said Kevin Quinn, GM director of additive design and manufacturing. “It’s already having an optimistic impact on exactly how we develop and build vehicles […]”

At GM, 3D printing allows the team to envision exactly what a production vehicle will look like and how all the parts will fit together. Issues can be diagnosed and corrected earlier, which ultimately reduces development time. The manufacturing process has become so central to production that GM recently built a 4,000-square-foot Additive Innovation Lab in Warren, Michigan.

In recent months, the world-leading car maker – like a lot of its industry competitors, including Ford and FCA – was struck hard by the impact of disrupted global supply chains, lockdown-induced shutdowns and a 30% crash in customer demand. But definately not closing the book on its operations for the duration, GM turned the ability in mass production to medical supplies and devices to help the healthcare sector manage the crisis.

“We could not have responded to the coronavirus as quickly as we did without 3D printing,” said Ron Daul, GM director of additive manufacturing. “The investment in both our additive manufacturing facilities and training the team to leverage 3D printing for development enabled us to pivot to making ventilators and personal protective equipment virtually overnight.”

Nearly all tools used to assemble the ventilators that GM manufactured with partner Ventec Life Systems and collaborator Hamilton Medical are 3D printed. Most are 3D-printed “nests” or fixtures that hold parts in position during assembly. These nests were reverse engineered from part data received from Ventec in Seattle and Hamilton in Switzerland.

“3D printing allows us to make constant, rapid changes to fixtures based on feedback from the assembly teams,” said Dominick Lentine, GM senior manufacturing engineer, additive applications. “We can receive feedback from Hamilton, improve a part and have it flown back to Reno in less than 24 hours.”

To increase the speed of response even further, teams from GM’s Additive Innovation Lab and Additive Industrialization Center delivered and installed 3D printers from their respective facilities to the core plant in Indiana to print new hand tools onsite.

GM’s resources and expertise in 3D printing also helped the company develop and produce face shields for first responders, seeing a dire need for the protective equipment at local hospitals. The additive manufacturing team started with an open-source design that originated with desktop 3D-printer manufacturer Prusa Research, and quickly delivered prototypes to local healthcare workers and from there, making three crucial improvements based on healthcare workers’ feedback before producing face shields in large quantities.

The car maker had been able to print parts for more than 17,000 supreme quality, latex-free face shields. Simultaneously, the team sent the ultimate design to be mass-produced using injection molding. Since the final design went in to full production, more than 250,000 face shields have now been produced.

GM’s quick pivot to producing much-needed supplies to the health sector was permitted by its investment in to 3D printing and vast new facilities. The Additive Innovation Lab is “easily accessible to tens of thousands” of engineers, designers along with other team members who is able to learn how to operate 3D printers and software, and convert files into physical parts. To date, significantly more than 700 employees have been trained by the facility’s workforce.

“Most design work takes place in computer-aided design or computer-aided engineering these days, but there’s no substitute for having an actual part in hand to prove out your concept, be it a transmission component or a face shield visor,” said Quinn.

3D printing in the spotlight

GM is by no means the sole firm to contribute to the production of medical equipment amid the pandemic with 3D printing. Both large and small firms, as well as individuals, contributed to the equipment shortages utilizing the manufacturing technique, refocusing the spotlight on 3D printing’s advantages in rapid creation of physical parts, testing ahead of production, saved tooling costs, and rapid prototyping of versions and materials.

In Italy, 100 emergency respiratory valves were manufactured by 3D printing company Issinova for a hospital in Brescia. All were produced in just 24 hours, the hospital had been able to use these valves on patients for at most of the, 8 hours each.

The company’s mechanical engineer Alessandro Romaioli told BBC News that upon hearing the call for help, that he and his CEO rushed to a healthcare facility to get yourself a look at the valves and developed a prototype in just 3 hours: “They tested it on a patient and they told us that it worked well and so we ran again back to our office and we started to print new valves.”

Open-source projects were launched to support efforts from all over the world in the hopes of sourcing as many designers and manufacturers as possible to boost production.

The Indian Ocean tsunami remembered by those who survived it