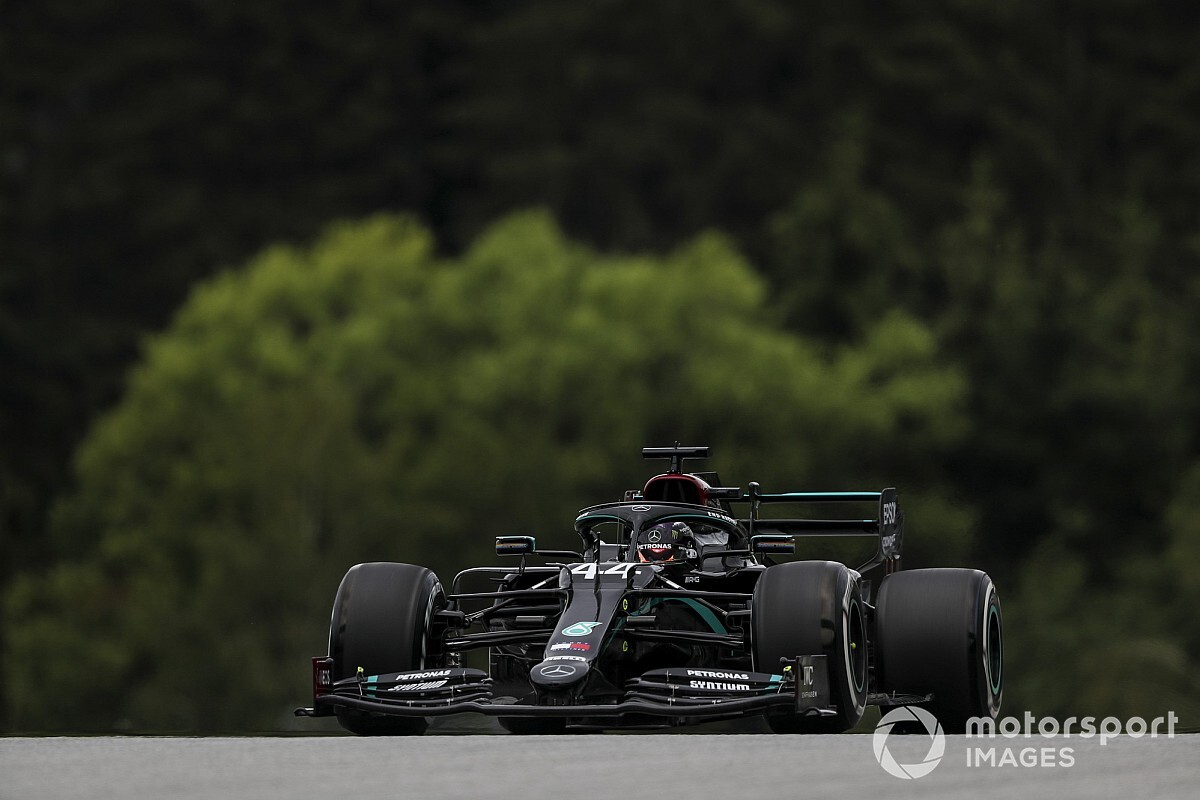 Seven months after the 2019 campaign concluded, the coronavirus-delayed new season began under cloudy skies at the Red Bull Ring, with little action taking place in the first third of the 90-minute session.

Most cars were kept within their garages following the field completed the initial installation laps, even though McLaren drivers Carlos Sainz and Lando Norris, alongside Bottas, set the early pace.

But the trio joined the others in the pits after 20 minutes as a wet track was declared following a light smattering of rain.

Ferrari’s Sebastian Vettel light emitting diode the field back out for a few laps on the intermediates, however the drivers quickly concluded that the track had not been wet enough to use the grooved rubber.

Shortly after the session’s first third had been completed, Hamilton set his first flying laps on the hard Pirelli rubber, improving on three successive laps to soon claim the most notable spot with a 1m06.994s.

Racing Point’s Sergio Perez looked set to depose Hamilton soon afterwards but his RP20 began smoking around his flying lap and he’d to abandon his effort so the issue could be rectified.

Hamilton continued to boost the best time, fleetingly interrupted by Lance Stroll before the Racing Point driver had his time deleted for a track limits infringement at the exit of the penultimate corner.

A flurry of action in the center of the session led to Sainz, Stroll and Renault’s Daniel Ricciardo enjoying brief spells in first place, with Perez then taking the most notable spot as soon as he came ultimately back to the track to head a short Racing Point 1-2 with 1m06.052s.

But as the session approached the one-hour mark, the Mercedes cars returned to the fray after a chunk of time waiting within their garages, with Bottas bettering Perez’s improved best of 1m05.773s to a 1m05.486s on the softs.

Hamilton then used their own first effort on the red-walled soft tyres to retake first with a 1m04.968s – attacking the kerbs at the exit for the Turn 7/8 fast chicane and the final with apparent gusto.

The world champion then improved the fastest time to a 1m04.816s with 27 minutes remaining, which stood as the session’s before the end – Bottas finishing 0.3s in arrears.

Max Verstappen took third after spinning his Red Bull at the exit of the first corner – losing the rear as he swung past the apex, echoing the number of spins that he and teammate Alex Albon had in winter testing.

But he quickly got going again and used his softs to climb the order and end up 0.6s slower than Hamilton.

Sainz, Perez and Norris finished in positions four-six, with Albon and Ricciardo trailing them.

Kevin Magnussen took ninth for Haas, with Charles Leclerc rounding out the most notable 10 on the medium tyres, 1.1s slower than Hamilton in the thing that was a low-key session for Ferrari.

Stroll finished 11th in front of Vettel, with Esteban Ocon 13th for Renault but stepping out of his car early after it shed an item of bargeboard bodywork as that he ran down the main straight with 20 minutes to go, which required a short virtual safety car to recoup.

Several drivers – including Perez – had lock-ups at the tight up-hill right of Turn 3, nonetheless it was Turn 1 that appeared to be causing most issues, with Kimi Raikkonen (15th for Alfa Romeo) searching for and running deep there on two occasions.

Pierre Gasly (AlphaTauri) spun in front of George Russell at the final corner late on, which the Williams driver did well to prevent, and the pair finished P16 and P17.

Romain Grosjean brought up the trunk of the field for Haas with just six laps on the board, as that he missed the majority of the session after reporting a brake issue in early stages, even though he did appear for a final tour in the dying moments.

Coronavirus in America: latest news, live | Brazil becomes the country with the most...

Apple and Google are building coronavirus tracking into iOS and Android