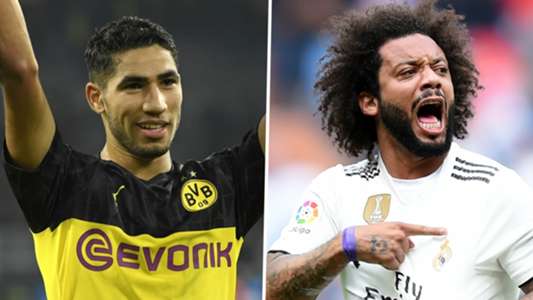 Achraf Hakimi has revealed his admiration for Real Madrid defender Marcelo as a new player he aspires to emulate in his career.

The Moroccan full-back is reportedly on the verge of leaving the Spanish giants after agreeing on a five-year deal with Inter Milan at the end of his Borussia Dortmund loan.

Hakimi has been at Real Madrid since 2006 at the tender age of eight, and he progressed through the club’s youth ranks, playing for Los Blancos throughout their pre-season tour in 2016 and also featuring for the Real Madrid B-side.

He made his La Liga debut in October 2017 and two months later, he broke his league duck against Sevilla.

While developing his game at the Madrid academy, Hakimi had his sights set on Marcelo, who has been at the club since 2007, because of his qualities on the pitch and sense of humour.

“It was a dream for me to play alongside him, like it was when I signed for Real Madrid. I signed when I was young; I didn’t believe it when they called me,” Hakimi told BBC Sport.

“As a new player, I looked up to Marcelo because that he plays in the same position as me.

“He laughs all the time too; when he plays, he enjoys it. I want to be like him.”

During his two-year loan spell at Dortmund, Hakimi showed his versatility in Lucien Favre’s team to play as a left-back, right-back or winger in a few situations.

He proved his attacking prowess by contributing 10 assists and five goals for the Black and Yellows who finished 2nd in the just-concluded Bundesliga campaign.

The Moroccan full-back shone in the many roles that he played in 2010, but that he reveals the right-back is his favourite playing position.

“I think I like the right-back role – but I like to go on the attack all the time,” he added.

“I like to play as a winger too, and sometimes I feel as if I want to play as a striker. But I think right-back is good.”

Despite his restricted playing time in Zinedine Zidane’s team, the two-time Caf Youth Player of the Year won two Champions League titles and one La Liga crown and the like with Los Blancos.