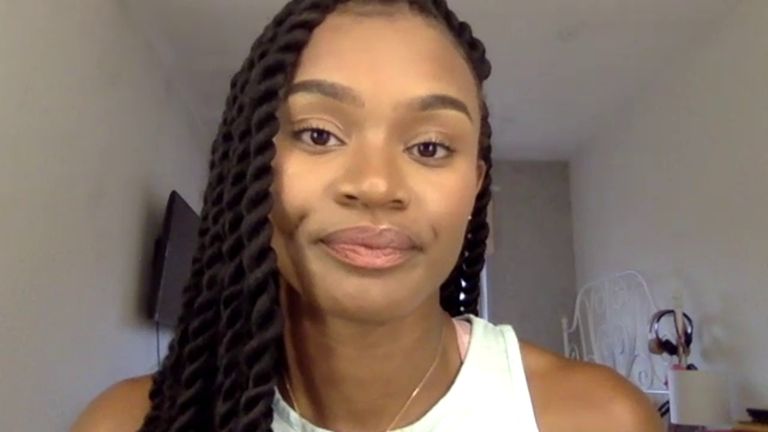 British sprinter Imani Lansiquot says she felt compelled to take a British Athletics role promoting equality and diversity after she was the victim of horrific racial abuse.

The 22-year-old World Championships silver medallist was known as a ‘monkey’ at a sponsor’s event recording.

And Lansiquot, one of 12 Sky Sports Scholars, is currently Athlete Lead in British Athletics’ Equality, Diversity plus Inclusion Advocates Group.

She told Sky Sports News reporter Emma Paton: “Unfortunately, earlier this year, I used to be involved in a very horrible event.

“That was the first genuine experience of overt racism. If I am truthful, I was totally shell-shocked regarding probably regarding two weeks after that.

“And I am actually grateful to a family in Sky, plus Sky Scholars, because I used to be calling individuals left, correct and center and getting guidance, and getting counselled by means of that.”

Lansiquot subsequently became a member of the Equality, Diversity plus Inclusion Advocates Group – formed in 2018 and which British Athletics says ‘invited staff who were passionate about E,D&I to support initiatives internally within the organisation’.

Lansiquot said that following the abuse she “didn’t really get much closure from the situation”. “I didn’t get a proper apology from the individual,” she added.

“And, in light of the recent events, with George Floyd (who died at the hands of police in the United States), with the Black Lives Matter protests, it literally felt like a wound was being re:opened again and again.

“I was itching, thinking ‘how can I find peace with this situation’?

“And thankfully British Athletics have presented this role for me and it is giving me an opportunity to actually do something about it, to turn that disgruntled emotion, feeling really frustrated, feeling pretty worthless, and turning that into something that is going to stop that happening to somebody else.

“It was pretty horrific but I am in a place where I am at peace with it, because at least I know I am in a powerful position at the moment.”

Asked if she felt she got the support she needed after the abuse, Lansiquot said: “My family were integral at that point.

“They were so shocked that, within 2020, something like that could happen.

“My family at Sky – Tony Lester (head of Sky Scholarships), Geoff Shreeves (Lansiquot’s mentor) – I was in constant communication with them throughout the whole ordeal.

“British Athletics were extremely supportive plus I was actually able to be a part of an education programme for that company.

“But I didn’t get closure, so I am hoping my new role will enable me to achieve that, and enable me to feel like I am actually doing something about it that is ongoing and that can have a lasting effect.”

The Black Lives Matter movement is at the forefront of the sporting world at the moment, from Premier League footballers ‘taking a knee’ to show their support for the cause, to the England and West Indies cricket teams displaying the Black Lives Matter logo on their kit for the first Test.

But Lansiquot stressed that the hugely upsetting experience shows that this is a time for action, as well as words and gestures.

“It was weird,” she said. “I felt really shocked and I think the particular immediate thing I felt was shame.

“I felt guilt, I felt like it was my fault, and it took a lot of working along with my family and talking to people close to me, to realise that I wasn’t at fault.

“I am the huge advocate for actually doing something about it. Let’s bring this beyond words, let’s bring some action to this.

“Although I am really upset about what happened to me, I am looking forward to seeing how much further I can take this positivity beyond my incident.”

When Lansiquot discussed the incident with other athletes, she discovered that her horrendous experience had been far from unique.

“This happened earlier in the year and they [her team-mates] were really supportive of me,” she said.

“A lot of us got solace and support from hearing other testimonies and feeling like we’re not in this alone.

“That was one thing I really felt in the moment, extremely lonely, and hearing that collective voice of, ‘do you know what, I have been through this, this is what I did’ – it made me feel a lot better.”

A key person in the Great Britain team, Lansiquot reached the semi-finals in the 100m at the World Championships in Doha last year and was a member of the silver medal-winning squad in the 4 x100m exchange.

And she is determined not to let her career be derailed by an incident of disgusting abuse.

“It puts a bigger fire in my belly,” she said. “I am so proud to put the Union Jack on my back, to do laps of honour, plus to hear the national anthem.

“I want to be the figure that will shows that’s what sport is about.”

Reds GM Nick Krall: “Nothing On The Horizon”