Home Politics Jacksonville woman gets job as dishwasher at memory care facility so she... 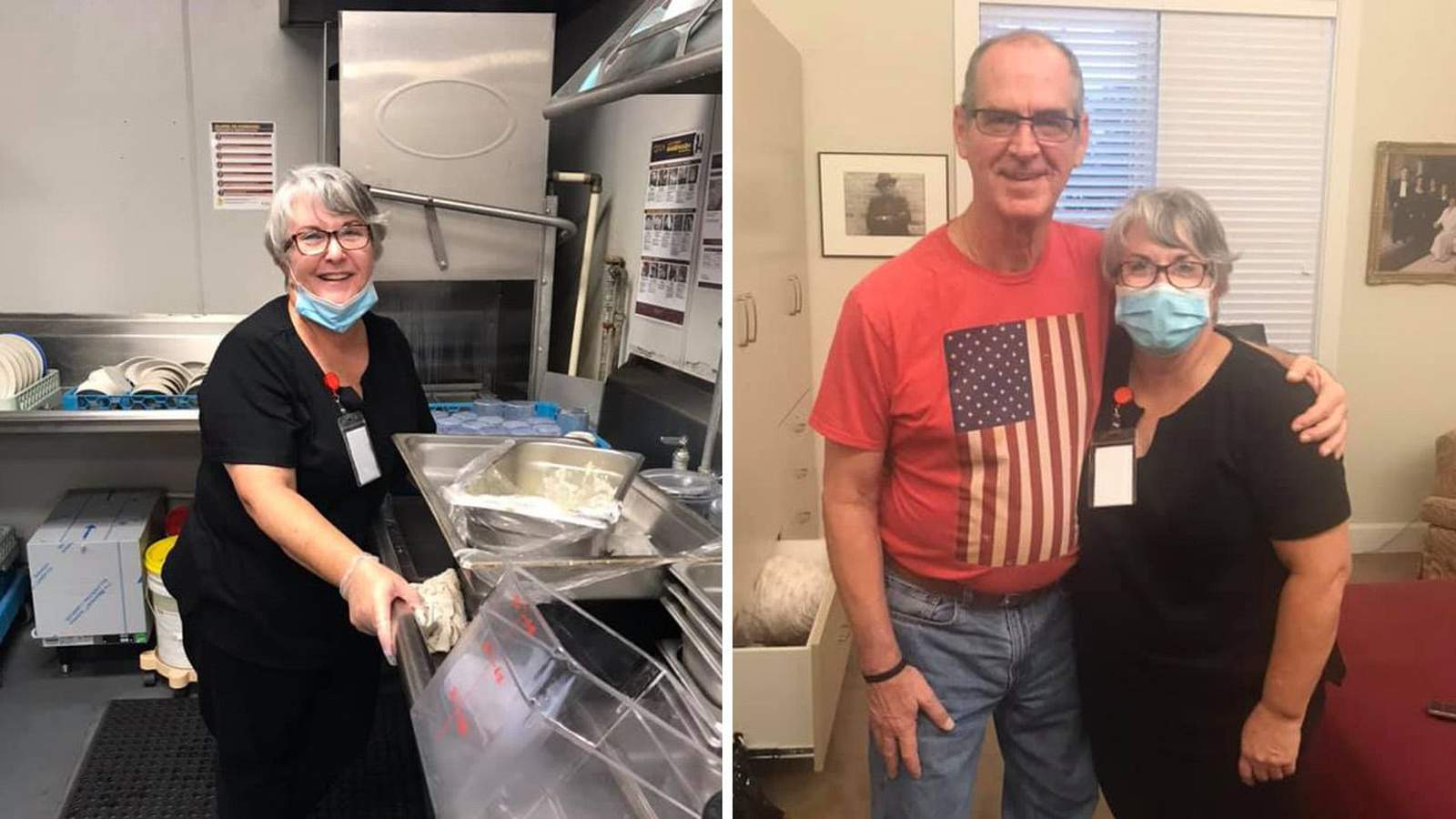 JACKSONVILLE, Fla. – A Jacksonville woman who was desperate to see her husband, who has Alzheimer’s disease, and hadn’t seen him in more than four months has finally found a way.

Mary’s husband, Steve, lives in a memory care facility full time, and since long-term care facilities are not accepting visitors because of the coronavirus pandemic, it led to heartache not being able to see one another.

Mary Daniel told News4Jax she was willing to do whatever it took to be with her husband, who lives 5 miles away. She did just that 114 days after she had last seen him when she got a part-time job as a dishwasher at the facility where her husband lives. The job is the real deal.

The Daniels are finally able to hug each other. Mary Daniel said, after she was hired, RoseCastle at Deerwood told her, when she’s finished with her shift, she’s welcomed to visit with residents.

“He saw me and said, ‘Mary.’ And we hugged and just like how I thought it would be. Just (to) hold him again after 114 days is just an amazing, amazing feeling,” she said.

Mary Daniel told News4Jax she can already see a difference in her husband after four days. Steve Daniel has lost 10 pounds because of the anxiety. Before the pandemic, she saw her husband every single day.

“He has no understanding of what I’ve done to get in there. How do we describe it to him when we don’t really understand what’s going on?” Mary Daniel said.

The COVID-19 pandemic has isolated those in long-term care facilities. Florida Gov. Ron DeSantis extended the ban of visitors another two months on top of the last four, but Mary Daniel said the threat of loneliness is a far greater danger.

Window visits weren’t enough. Mary Daniel’s husband Steve lives in a long-term care facility & is fighting #Alzheimers. With @GovRonDeSantis visit ban 2 more months on top of the past 4, Mary took a part-time job as a dishwasher at her husband’s facility just to see him! @wjxt4 pic.twitter.com/ZqVauq7Jxj

The window visits we’re enough. The pair have been married 24 years.

Many people ask Mary Daniel why doesn’t she bring her husband home.

“I can bring him home, but he’s back to being inside of a house, and I have to work. I’m only 57-years-old and I have to work to pay for his care, so I can’t be here with him,” she said. “It’s a really difficult decision.”

It’s isolating not only for the residents and staff inside but the families outside. Mary Daniel said the staff is amazing and has been so great with the residents, but the situation is depressing and has taken a toll on all.

Now that Mary Daniel is able to see her husband, she’s now fighting for other people so they can see their loved ones, too. She and others have a Facebook group called “Caregivers for Compromise – because isolation kills too!” and they are presenting a statement to DeSantis, including what has been working for other states.

Mary Daniel said she’s used to advocating for patients. In addition to her new part-time job, she founded ClaimMedic to help people with their medical bills. With the $40 per week she makes as a dishwasher, Mary Daniel said she is paying it forward and giving it back to the caregivers at her husband’s facility, so they know just how much they’re appreciated.

Egypt registers 720 new coronavirus cases in one day By Reuters