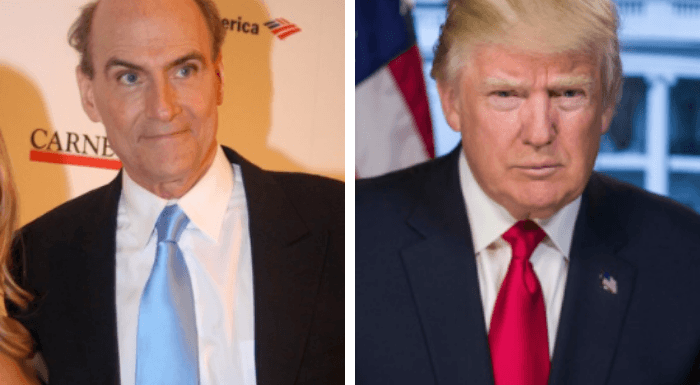 On Monday, legendary folk singer James Taylor slammed Donald Trump in a fundraising email for presumptive 2020 Democratic nominee Joe Biden, claiming that the President is an “inept and corrupt narcissist.”

“I don’t say this lightly, but it’s become more and more clear that Donald Trump is an inept and corrupt narcissist,” Taylor wrote in an email for Biden. “And rather than facing the challenge of leading America through a national crisis, he’s refused to take responsibility and started lashing out at others.”

“…. our government and America’s place in the world has been hollowed out — like a pumpkin on Halloween. The only difference is that there’s no light in there.

Instead, the White House is occupied by a puffed-up, self-absorbed, all-hat-and-no-cattle cowboy.”

RELATED: Trump: We Are In A Culture War – Republicans Must ‘Toughen Up’ Or Face Difficult Elections

Taylor: Biden is the ‘kind of leader we need right now’

“We can’t afford four more years of a man who cares more about his own power and celebrity than he does about the health and success of our country,” Taylor continued.

The iconic musical artist said that Biden was the “kind of leader we need right now” and asked for donations to his presidential campaign.

In 2016, Taylor contrasted President Trump with Italian World War II dictator Benito Mussolini, saying both were similar in that they were “world-class” narcissists.

It’s almost like James Taylor is saying that Donald Trump is … so vain pic.twitter.com/XYbisvBded

“[It] has been a boom to the comedy shows — it’s been a great source of delight for people making fun of it. Funny is funny, but this is not funny,” Taylor wrote in Rolling Stone magazine four years ago.

“This is the American experiment,” Taylor added. “This is the light of the world, whether or not we like it. People around the world are watching this thing, and they are absolutely aghast.”

RELATED: Patricia Arquette Claims ‘Donald Trump Is Not The Legitimate President Of The United States’

“They’re appalled at what we’re toying with here,” Taylor wrote.

He also concluded regarding Trump’s election, “It’s so baffling to me why people who feel this disenfranchised would choose as their champion this particular specimen. It almost feels like an act of random and wanton destruction to vote for him.”