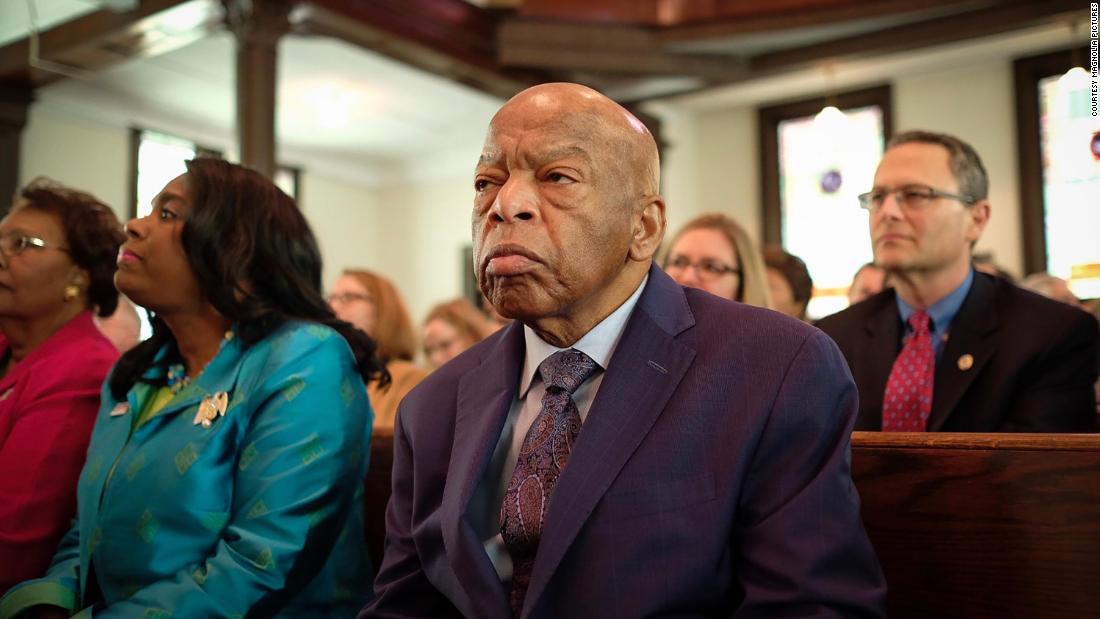 “When you see something that is not right … say something! Do something!” Lewis is shown saying, repeatedly, in speeches and appearances, counseling his audiences on the periodic need for “good trouble, necessary trouble.”

For Lewis, shown in his early 20s as a Freedom Rider, at the March on Washington and walking across the Edmund Pettus Bridge in 1965, which has included putting up with beatings by police and dozens of arrests, some of which, he adds wryly, came during his time in Congress.

“The reason why he’s effective as a leader is because he’s lived it,” says the late Elijah Cummings, one of the congressional colleagues — including Nancy Pelosi, Alexandria Ocasio- Cortez, Rashida Tlaib, Ayanna Pressley, Ilhan Omar and Cory Booker — who provide perspective and anecdotes, along with Bill and Hillary Clinton.

Much is created, amusingly, of the awe that Lewis inspires among people, recognizing that encountering the 80-year-old legislator is basically a direct connect to some of US history’s signature events. An aide quips that walking via an airport with him takes far longer than the actual quantity of steps required.

Because Lewis became an activist young, his biography is given relatively short shrift. The most salient personal details — provided simply by Lewis’ siblings — surround his courtship and marriage to his wife, Lillian, who died in 2012.

Directed by Dawn Porter (“Bobby Kennedy for President”), the film’s strongest asset is inevitably the extensive access enjoyed to Lewis himself, who speaks eloquently about the nation’s long road to justice and equality (“We’re not quite there yet”), his emotional response to Barack Obama’s election and his commitment to fight for what that he believes (“As long as I have breath in my body, I will do what I can”).

In terms of drawbacks, the film hopscotches around too much, jumping back and forth with time — a byproduct, perhaps, of the volume of ground there is to cover, a trait also evident in Hulu’s recent four-part Hillary Clinton biography, “Hillary.”
The filmmakers will also be there to see or watch election night in 2018, capturing the exultation when the Democrats took straight back the House. That victory aside, the erosion of the Voting Rights Act that Lewis fought to enact in the 1960s is presented as a call to action and a focus of the work yet to be achieved.

Beyond previously unseen material, the most intriguing interlude highlights Lewis’ 1986 campaign for his Georgia congressional seat, against longtime friend and fellow civil-rights activist Julian Bond. The bare-knuckles nature of that contest temporarily frayed their relationship — they truly are shown conducting an awkward interview after the race — displaying a tougher side to Lewis that gives some balance to his saintly image.

Mostly, though, “Good Trouble” appears content to bask in Lewis’ larger-than-life persona, which includes a grandfatherly elder-statesman status that allows him to make reference to 47-year-old Beto O’Rourke, the former Texas congressman and presidential candidate, as “this kid.”

Lewis — who is battling pancreatic cancer — wasn’t much more when compared to a kid when he marched alongside Martin Luther King Jr., and contains seemingly lived three lives since then. That’s why despite the documentary’s uneven aspects, his legacy is ample motivation for just about any student of history to see “Good Trouble” as a great investment.

“John Lewis: Good Trouble” will undoubtedly be available in select theaters and on demand beginning July 3.

‘Werner needs to perform or I’m in trouble with Chelsea!’ – Rudiger on agent...

Ivanisevic latest to test positive for COVID-19 By Reuters