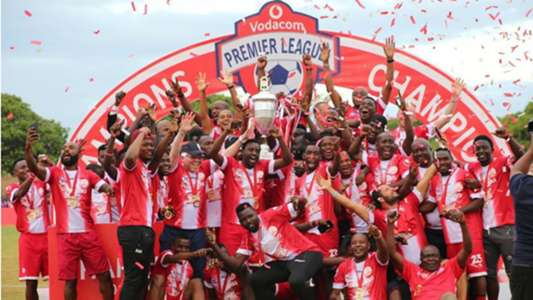 Simba SC have unveiled they are yet to celebrate their success in winning a third straight Mainland Premier League title.

The Wekundu wa Mzimbazi were crowned champions with six matches to spare and were ergo presented with the trophy last Wednesday, after their league match against Namungo FC at Majaliwa Stadium.

However, the club chairman Mwina Kaduguda has now stated the team is yet to celebrate winning the title since they want to have a double celebration when they beat Yanga in the FA Cup semi-final at the National Stadium in Dar es Salaam on Sunday.

“As a chairman and a passionate Simba fan, we want to celebrate two things which are winning the title and defeating Yanga and that is what the coach Sven Vandenbroeck recommended to be done,” Kaduguda is quoted by Daily News.

“I totally concur with him because many Simba fans are tired to be defeated by Yanga whose performance is far behind that of Simba hence the coach opted to take players directly to the camp.”

Kaduguda further said they did not want the players to celebrate since they were facing a hardcore team within their next assignment.

“These players travelled from Dar es Salaam to Mtwara and thereafter to Lindi and after their game against Namungo on Wednesday, they returned back to Mtwara and had to wake up very early to catch the flight back to Dar es Salaam,” Kaduguda continued.

“And yet upon arriving in the city, you would like the same players to stand on the open vehicle for almost two hours parading the trophy under the scorching sun? Surely, tactically, football is not that way and I’m afraid to call that as politics.

“For us, we always have the mindset to be champions while for Yanga, in my opinion, they just think to defeat Simba and not necessary to compete with other big teams on the continent.”

The winner will cruise into the final and will face either Namungo FC or Sahare All Stars, who will face off in yet another semi-final clash at Mkwakwani Stadium in Tanga.

Redding relieved to get over with “tough” Portimao weekend