Home Entertainment Kourtney Kardashian & Scott Disick Are ‘Not Back Together’ (Yet!!) – But... 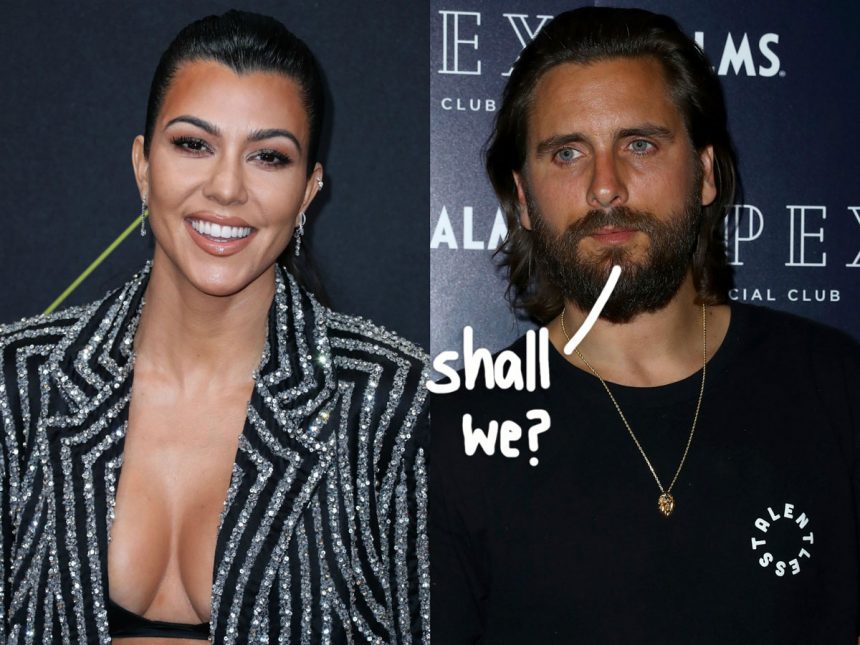 Kourtney Kardashian and Scott Disick‘s rumored reconciliation is so close, we can almost taste it!

The co-parents of three have clearly had some fun at our expense lately, teasing their on-again, off-again relationship on social media with flirty comments left and right. At the very least, based on their recent activity, we know there’s still a lot of love left between them — which, BTW, has got to suck for freshly dumped ex-girlfriend Sofia Richie!

However, the people would love to know, will there ever be something more between the KUWTK stars again?!

Related: Scott Disick Is ‘Always Flirting’ With Kourtney — But Is She Even Open To It?

Now, before the Kourt and Scott shippers out there get worked up over yet another easter egg clue, a source close to the situation has come forward with a new update in this never-ending saga, firmly telling Us Weekly the two are “not back together,” but they are “incredibly close.”

We can’t help but think it’s only a matter of time before that changes, though! Let’s reconsider everything that’s happened between the 41-year-old Poosh founder and 37-year-old Flip It Like Disick star up to this point. They share over a decade of memories and three beautiful kids together — Mason, 10, Penelope, 7, and Reign, 5 — and co-parenting their brood has always remained a top priority, regardless of any temporary significant other that came into the picture. Sorry, but it’s true, Sofia and Younes Bendjima (remember him?!)

It was expected that Scott would lean on his family during recent hard times, including a brief attempted stint in rehab for continued struggles. However, one cozy family trip led to another, and then fans spotted Miz Kardashian wearing one of her ex’s shirts — twice! — and then the rumor mill REALLY got going again!

Related: Here’s Why Sofia Richie & Scott Disick Might REALLY Be Over For Good!

Most recently, Kourtney paid tribute to her baby daddy on Father’s Day by sharing a sweet family photo and public message of affection, which reminded us all of the special place he’ll always hold in her life:

“Happy Father’s Day, thankful for you and these three special ones.”

Although late last month, a different source told the outlet there’s still a bit of apprehension for the starlet:

“Kourtney has always been hesitant about getting back together with Scott or letting him in in a romantic sense. She has given him so many chances over the years after he has said that he is going to prove himself to her, and he seemingly still hasn’t in certain aspects … [but that said, a first love is not something you just wash away. The fact that he is the father of their three kids keeps them connected forever. Kourtney wants the best for Scott and knows they’ve been through the wringer together. She lets him in — but at an arm’s length.”

Hmm, what do U think, Perezcious readers?? Do U agree that it’s only a matter of time before this OTP throws caution to the wind and decided to give it another go?

Iran to execute spy who helped US target general: judiciary

Democrats are stronger favorites in tight race for Senate control