Home Politics Liberals Melt Down After Ivanka Trump Posts Picture Of Herself With Goya... 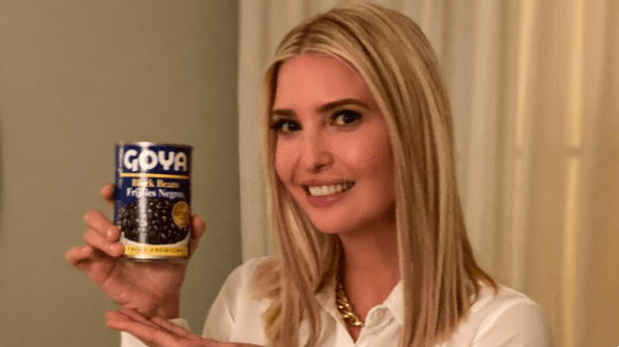 The left predictably had a collective aneurysm after Ivanka Trump, the president’s daughter and a senior White House adviser, posted an image of herself holding a can of Goya black beans.

“If it’s Goya, it has to be good,” she tweeted along with the Spanish translation: “Si es Goya, tiene que ser Bueno.”

Goya Foods has been the subject of a liberal-fueled boycott after CEO Bob Unanue made supportive comments about President Trump.

“We’re all truly blessed at the same time to have a leader like President Trump, who is a builder,” he said at a White House event, prompting outrage from easily triggered Democrats such as Alexandria Ocasio-Cortez and Julian Castro.

Unanue refused to cave to the rage mob.

The boycott was countered by a ‘buycott’ that has boosted sales.

If it’s Goya, it has to be good.
Si es Goya, tiene que ser bueno. pic.twitter.com/9tjVrfmo9z

The Ivanka picture was hilariously reminiscent of her father’s Cinco De Mayo post in 2016 which featured him eating one of the “best taco bowls” before declaring “I love Hispanics!”

Outraged leftists responded to that effort in a similar manner to Ivanka – with reasoned discourse and vigorous debate.

Just kidding, they accused her of breaking the law.

Peter Baker of the New York Times tweeted, “Federal ethics law: ‘An employee shall not use or permit the use of his Government position or title or any authority associated with his public office to endorse any product, service or enterprise…’”

Of course, she’s not endorsing the product but rather, poking fun at the controversy.

Nor was Barack Obama endorsing Blackberry when he told reporters in 2012: “I’m still clinging to my BlackBerry. They’re going to pry it out of my hands.”

At that time, Obama was praised for “perhaps the greatest product endorsement in history.”

By contrast, the media wants Ivanka hauled off to prison for holding a can of beans.

Federal ethics law: “An employee shall not use or permit the use of his Government position or title or any authority associated with his public office to endorse any product, service or enterprise … ” https://t.co/yJQKI3qFFY

“Had it with anyone who EVER defends this woman or puts her as the ‘sane’ one in this family,” Teigen pouted. “What a repulsive trolling of the people.”

“Also (in the SEA of illegal shit this family does) is this even ethically ok or legal?” she asked.

Why is a senior White House official endorsing a food product?

Federal ethics laws state: “An employee’s position or title should not be used to coerce; to endorse any product, service or enterprise; or to give the appearance of governmental sanction.”

We just saw eight years of former First Lady Michelle Obama telling people exactly what they should be eating. Perhaps if Ivanka claims it’s simply part of a new healthy eating campaign the left will quiet down.

Indians Among the Most Affected by macOS Malware Shlayer: Kaspersky

Coronavirus: No change in outbreak despite China spike, WHO says

US plans to evacuate Americans from Wuhan amid coronavirus outbreak