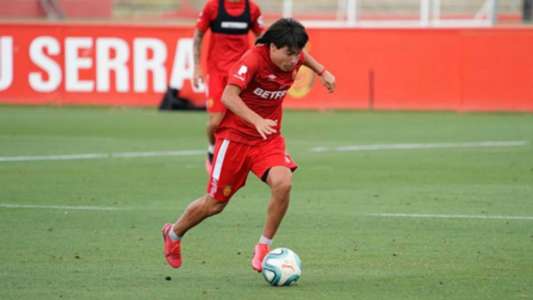 Mallorca youngster Luka Romero became the youngest player ever to feature in La Liga when he came on against Real Madrid on Wednesday.

The 15-year-old replaced Idrissu Baba in the 83rd minute of the 2-0 defeat to Zinedine Zidane’s side to set a new record in the Spanish league.

The previous record had been set over 80 years ago when former defender Sanson made his debut for Celta in December 1939.

The attacking midfielder had been within the Mallorca matchday squad for clashes against Villarreal and Leganes in recent weeks, but was finally given his first taste of senior football with a brief appearance against the capital club.

Romero, who’s said to have caught the interest of Manchester United, Barcelona, Juventus and Atletico Madrid, was born in Mexico but represents the Argentina Under 17s.

At age seven he’d a trial at Barcelona and impressed the Camp Nou outfit’s scouts enough to convince them to try to sign him, but his parents refused to move to Catalunya and he finished up joining the Mallorca youth set up five years ago.

The teenager is the son of Argentine defensive midfielder Diego Romero, who currently plays for Son Verí in the regional leagues in Spain.

Romero’s brief appearance could do little to show his team’s fortunes around, as Los Blancos had already taken a two-goal lead because of strikes from Vinicius Junior and Sergio Ramos.

The victory took the Santiago Bernabeu side back again to the top of the Spanish top flight with seven games left to play. They are level on points with Barcelona but have an improved head-to-head record over their fierce rivals.

Mallorca, meanwhile, remain in the relegation zone. Vicente Moreno’s team are third from bottom and three points behind 17th placed Eibar, who have a casino game in hand as they face Valencia on Thursday.

Queer Eye’s Bobby Berk Claims A RHONY Star ‘Literally Stole’ From Him – And...

Who are the best available 2020 NFL free agents?