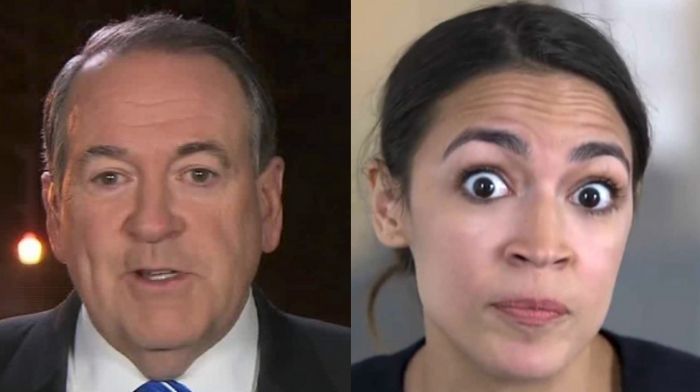 “There’s a big difference between shoplifting and cold-blooded murder and for her not to know the difference is frankly astonishing,” Huckabee said while appearing on the Fox News show “America’s Newsroom” on Monday.

Huckabee was responding to comments Ocasio-Cortez made during a Town Hall last Thursday in which she said crime was only increasing because struggling New York residents have no choice but to shoplift to “feed their child.”

“Do we think this has to do with the fact that there’s record unemployment in the United States right now?” she questioned. “The fact that people are at a level of economic desperation that we have not seen since the Great Recession?”

“Maybe this has to do with the fact that people aren’t paying their rent and are scared to pay their rent and so they go out, and they need to feed their child and they don’t have money,” Ocasio-Cortez continued, adding that “they’re put in a position where they feel like they either need to shoplift some bread or go hungry that night.”

AOC on increased NYC crime: “Maybe this has to do with the fact that people aren’t paying their rent & are scared to pay their rent & so they go out & they need to feed their child & they don’t have money so… they feel like they either need to shoplift some bread or go hungry.” pic.twitter.com/oHSTWWJZ6a

Huckabee, however, was not having any of it. He doubled down when host John Roberts pointed out that a 1-year-old was shot and killed and three other people were injured late Sunday night during a family barbecue at a park in Brooklyn.

“Her saying, ‘people are hungry so they’re going out and lifting bread,’ no, they are going out and killing people randomly,” Huckabee said. “You don’t kill a 1-year-old because you need some bread, that doesn’t put bread on your table and that’s why the absurdity of her [Ocasio-Cortez’s] remarks have to be called out.”

“She needs to be held accountable for this,” he added. “She needs to walk it back and recognize that violent crime has nothing to do with people’s lifting some bread. If she’s really interested in it, why did she kill thousands of jobs that could have helped people in her community when Amazon wanted to come? Or why doesn’t she open a soup kitchen?”

“There’s a lot of things that could be done to help people who legitimately have physical needs and food needs, but violent crime ain’t one of them,” Huckabee concluded.

The New York Police Department (NYPD) has seen a staggering uptick in crime in recent weeks in the wake of efforts to defund the police in the city. This past Saturday, there were 15 shootings in 15 hours, according to the New York Post.

This piece was written by PoliZette Staff on July 13, 2020. It originally appeared in LifeZette and is used by permission.

Read more at LifeZette:
Goya Foods sales take off after liberal boycott
Ricky Gervais torches cancel culture and ‘outrage mobs:’ Says ‘The Office’ could never be made today
Black singer ‘Lady A’ eviscerates Lady Antebellum for using their white privilege to sue her over her name

What  Six years ago, Israeli occupation forces targeted the Islamic University of Gaza (IUG) in one of the deadliest military offensives against the two million...

‘Homemade’ directors share how the series came together amid quarantine

Stephen Strasburg agrees to deal to stay with Washington Nationals