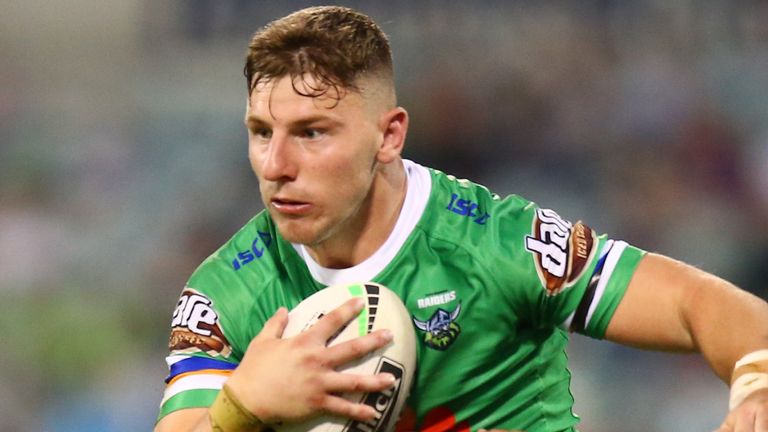 Watch Williams and Canberra Raiders take on Melbourne Storm, along with seven other matches from Round 9 of the NRL, this week on Sky Sports

Question: Do you know who was simply man of the match for Canberra Raiders in the 1990 Channel 10 Challenge Cup final? Or which player scored a club-record 22 tries in 20 games in 1993?

If you do not know the answers – Gary Belcher and Noa Nadruku, by the way – then George Williams will likely be able to assist you with those and any pieces of Raiders trivia you may be wondering about. Or will undoubtedly be able to, at least.

That is because being grilled on Canberra’s history and traditions is element of the pre-season training programme the squad undergo every year, something which came as a shock to Williams when he made the switch from Wigan Warriors over the cold weather.

“I couldn’t believe how big the club put an emphasis on what had happened previously and who wore the shirt before us,” Williams told the Sky Sports Golden Point Vodcast.

“In the first week, they do a weekly questionnaire on the past – who’d won what games, who played in what games – and I was like a lost soul, I didn’t have a clue with some of the answers.

“But I’m getting better slowly and it’s good the club look back and appreciate who played for the club and who won things for the club.

“All of the boys who have been there for a couple of year know all of the legends inside out. I’m still learning, but I’m getting to grips with it slowly.” 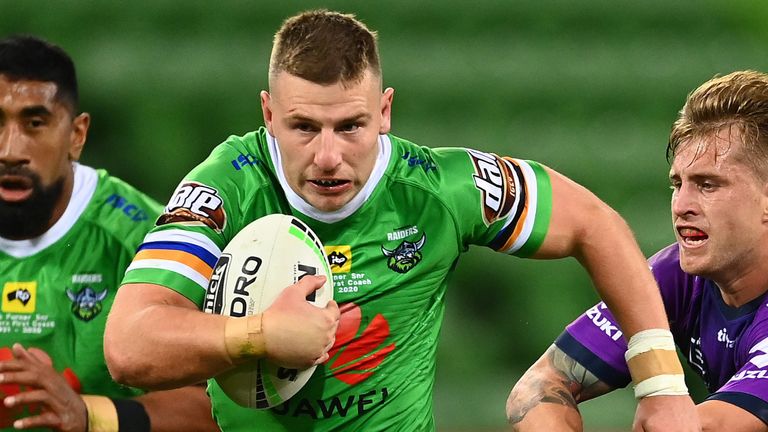 All of the boys who’ve been there for two year know all of the legends inside out. I’m still learning, but I’m getting to grips with it slowly.

It is no surprise head coach Ricky Stuart believes the club’s heritage to be vital, given he is one particular who could probably have his own section on any Raiders history pop quiz thanks to his contributions down the years both on and off the field at GIO Stadium.

But as well as teaching him about the history of the three-time premiers, Stuart could very well be also the perfect person to help Williams continue his education as a half-back after leaving hometown club Wigan to check himself in the NRL.

The 25-year-old has already made a big impression in Australia, with the likes of Cooper Cronk heaping praise on him for his performances along side Jack Wighton in the halves throughout the early rounds of the season.

However, results have been mixed in recent weeks and although Williams’ first decide to try in the NRL helped Canberra return to winning ways by seeing off St George Illawarra Dragons 22-16 last week-end, the England international is aiming for more when they face Melbourne Storm this Saturday.

“I didn’t think it was ever going to come,” Williams said. “I was pretty very happy to get over and it was quite a while coming.

“We’ve had several tough losses recently, but we were back in the winner’s circle this week-end so it’s to date, so good.

“I just think we’ve probably not played well since we last played Melbourne, which was Round 3, so it is just getting back to that kind of form [a 22-6 win].

“No doubt Melbourne will be watching that game back and kicking themselves wanting to get one over on us this week. I think we have to get back to what we do best and hopefully we’ll bring that on Saturday.”

The clash with the Storm will be only Canberra’s 2nd game on their home patch this year, having had to play their home games at Campbelltown Stadium in Sydney since the season resumed as a result of travel restrictions which were set up in an effort to help curb the coronavirus pandemic.

But now the clubs, with the exception of Melbourne and the New Zealand Warriors, have been cleared to utilise their usual homes for matches as those restrictions are eased and Williams is wanting to run out in Canberra for the very first time since the opening game of the season in March.

“It was pretty tough, but we just wanted to reunite playing and that’s the sacrifice we’d to make,” Williams said. “We had to play our games at Campbelltown and that’s three or four hours on a bus.

“It depends what we do each week – sometimes we’ll fly up and drive back or drive up and fly back – but it was strange to truly have a home game four hours away.

“But I’m really pleased to be back at home, it’s only my second game at Canberra’s stadium so it is pleasing that only have to drive five minutes and not four hours.”