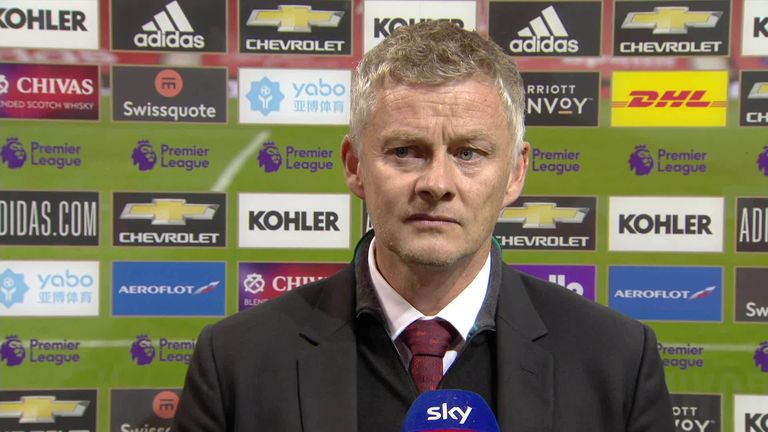 United missed the chance to move third in the Premier League as the result left them in fifth place, with one point separating themselves, Chelsea and Leicester in the race for two positions in next season’s Champions League.

The visitors’ battling spirit was seen in abundance as Michael Obafemi stooped to earn a share of the points in the 96th minute, with United down to 10 men with Brandon Williams forced off following a late head injury.

“It’s the worst time to concede a goal but that happens in football,” United manager Solskjaer told Sky Sports.

“You’ve just got to take it because we’ve won so many games that way ourselves. It’s all part of the learning for this team to be sat there, really disappointed, after you think the three points are in the bag.

“But probably we didn’t deserve three points today. They played well. They’re physical, very fit. We never got the rhythm in our passing today, especially when we got to 2-1 but we created chances, played some fantastic football at times.”

Solskjaer was under pressure at the beginning of the campaign, but the January arrival of Bruno Fernandes has helped the former United striker turn things around.

That’s precisely what his team did in the first half on Monday as goals from Marcus Rashford and Anthony Martial cancelled out Stuart Armstrong’s 12th-minute opener.

Solskjaer does not believe the late concession was due to fatigue, adding: “No, I think we’ve had enough recovery. It was just one of those days where we didn’t take our chances and they took theirs at the end.

“David [De Gea] made one very good save, but apart from that we had all the chances. Southampton are a good side, though, and you’re not going to just be given three points.”

Solskjaer had fielded the same starting XI for the fifth consecutive league game, and he was forced to patch up his team in the second half with Luke Shaw being sustaining an ankle injury.

His replacement Williams then collided with Kyle Walker-Peters, and Solskjaer said at his post-match press conference: “Luke twisted his ankle. Hopefully, we can have some good news on him after we’ve done a scan.”

In a separate interview with MUTV, Solskjaer added: “I can’t say [really], I’ve not seen Brandon because he was with the medical staff and I think he was getting some stitches with a gash over his eye. So let’s see how he is.”

Southampton headed to Old Trafford in excellent shape, with recent victories achieved against Watford and more notably Manchester City – and the 52 per cent possession indicated they were good value for their point.

But defender Harry Maguire rued his side’s late lapse in concentration, which leaves United still in fifth place having failed to capitalise on Chelsea and Leicester losing at the weekend.

“We’re disappointed as we had control of the game and had numerous chances to kill it off,” Maguire told Sky Sports. “We weren’t at our best. There are areas that we need to improve on, but we did enough to win the game. A set play has killed us in the end.

“The second half was a bit of a slog and we weren’t good enough on the ball. We brought pressure onto ourselves and we didn’t get the third to kill it off. Going down to 10 men was unfortunate but hopefully Brandon is OK.

“We’ve been really good on set plays during this run, but they’ve managed to get a flick on at the near post. We’ll have to look back at it to see what went wrong. We’re disappointed at the moment but we’ll dust ourselves down and try to pick up another three points.”

Southampton could have been reduced to 10 men in the first half when Oriol Romeu caught Mason Greenwood on the ankle, but referee Chris Kavanagh did not penalise the midfielder, who also escaped punishment upon VAR review.

“I know my ankle wouldn’t take that challenge as a nice one,” Solskjaer added. “It was a nasty one, but we’ve said enough about VAR.”

Gary Neville said on co-commentary: “Oooooh. Do I not like that. I think that’s a bad one. The ball has gone; I think he’s lucky there, Romeu. He tried to do him. They can be leg-breakers, those ones.”

Speaking in the Sky Sports studio, Eni Aluko said: “I think it’s a red card. It’s difficult to judge the pace but there’s an extension of the leg and it’s a dangerous tackle. There needs to be a consistency, so the referee has the power to make the judgement.”

“I think it was accidental and had there been more force to it, it could’ve been similar to other red cards we’ve seen this season, but I feel it was the right decision.”

Hasenhuttl was understandably delighted by his team’s late response, telling Sky Sports: “When you put aside 10 minutes in the first half, you could say we passed the test. But if you stop being brave and if you stop being organised, if you’re not closing from the front, you are immediately in trouble. But I’m pleased with the overall job we did.

“We gifted two chances and they scored both, but we found our game again 10 minutes before the break. We then had good possession, good balance and good game management. Reddy [Nathan Redmond] had a big chance which drew a good save from De Gea, and in the end I think it’s deserved.”

Southampton have rallied remarkably since the 9-0 mauling at home to Leicester in October, with Hasenhuttl taking the side well away from trouble and up the standings.

Le Tissier has been impressed with the attitude shown since the restart with the side not in any danger of being relegated while not in contention for a Europa League place.

He told Sky Sports: “It’s professional pride, but it’s also what the manager instils in them, wants from them and demands from them. I go back to the win over Manchester City a week ago, and the commitment they showed in their defending was like a team that were sat third from bottom in the table.

“The professionalism of the players has been an absolute credit to the manager and the football club. When you look at what we’ve been capable of in the past few weeks – we’ve just played Manchester City at home, Manchester United away, Everton away.

“Unbeaten with five points, you look at that and think if you take that form into next season, what can we realistically expect? From what I’ve seen, I’d expect a top-half finish from this group.”

In London, Cambodian Elites Tread in the Kremlin’s Footsteps

Where is the mask mandatory? Should I take it for a run? What happen...

Are you really cut out to be a manager?