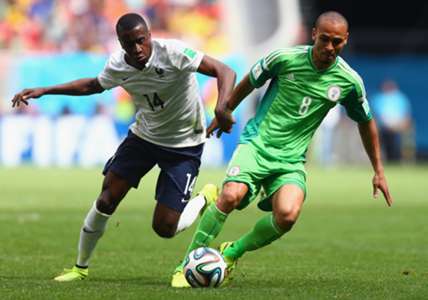 The former Nigeria international enjoyed a creditable career with the Super Eagles, often by being a shining light in the darkness

For a generation of Super Eagles fans, one of the more iconic images of the 21st century is that of Osaze Odemwingie celebrating at the 2004 Africa Cup of Nations.

That famous two-goal cameo in the game against South Africa in Monastir made him into a household name almost overnight. However, it was back in 2001 that the forward truly began to catch the eye.

His performances at Benin Club Insurance saw him called up by Nigeria coach Adegboye Onigbinde in preparation for the 2002 World Cup. He would ultimately fail to make the cut, and was instead named as one of two alternate players.

That was a period defined by a great deal of experimentation in the national team set-up, as Nigeria sought to rebuild the national side following its now-infamous disbandment after the 2002 Africa Nations Cup. Odemwingie was very much a part of this new wave, splitting time between the Super Eagles and the U-23s.

Nevertheless, he played a vital role in qualifying for the 2004 edition, scoring in a rousing come-from-behind 2-2 draw against Angola in Benin City. Fielding a heavily-depleted side, Christian Chukwu’s side were two goals down inside 55 minutes before staging a fightback for the ages.

Kalu Uche halved the deficit with a header, but it would be the dual-national with the boyish looks who would complete the turnaround. Amid the chaos of a hotly-debated penalty award, Odemwingie held his nerve to convert, his spot-kick effectively confirming Nigeria’s place in Tunisia.

It was fitting then that, having scored the goal that sealed qualification, he would seize the opportunity of the tournament itself to announce himself to the world.

A lot needed to happen to lead up to that moment, of course. In the first place, it is unlikely that Chukwu, needing more goals to pull clear of South Africa, would have turned to him had Yakubu Aiyegbeni and Victor Agali not been busted for indiscipline within the camp. Also, perhaps with a better goalkeeper than Emile Baron, the story might have been different.

Then again, one might argue that when the stars are so keen to align, there is little mere mortals can do but stand aside and let the cards fall as they will.

Certainly that feeling is reinforced by the fact that Julius Aghahowa, the only other striker left following the defenestration of the other two, then picked up an injury in the very next game against Benin Republic, further bumping Odemwingie up from substitute to starter.

“Every thing has it’s own time and I believe that you don’t have to rush things,” he said of his rise to prominence. “They will come easy at the right time and when it gets to that time, you will feel it.”

He certainly felt it, and scored once more in the tournament — in the third-place play-off against Mali. Three goals in his first ever outing with the national team; not a bad return by any stretch. However, the wider significance of his performance in Tunisia (and his entire international career, really) was probably in challenging a Nigerian stereotype.

Ten years prior, the Super Eagles had won a second Afcon in Tunis with the physical prowess of a snarling, grunting Rashidi Yekini leading the line. In the ensuing years, he came to be seen as the walking epitome of what a Nigerian striker should be, and it is arguable that the rise of Odemwingie was the key to widening perceptions.

The son of a Russian mother, his softer features and less aggressive style made it clear there was more than one way to play as a striker for the national team.

Although he rarely ever played centrally after that tournament, his versatility and knack for important goals meant he enjoyed a quite fulfilling international career.

He was also able to stand out even in some of the Super Eagles’ lowest moments: he was one of the few bright spots in Amodu Shaibu’s dour third spell in charge of the national team and was named in the 2010 Africa Cup of Nations Best XI, and he famously scored the goal (against Bosnia-Herzegovina in 2014) that won Nigeria a World Cup match for the first time in 16 years.

As is often the case when discussing legacy, it is impossible to overlook the unsavoury.

Odemwingie frequently had run-ins with authority, and was outspoken almost to an unhelpful degree. He publicly called into question the decision-making and tactical nous of both Amodu and Lars Lagerback, and famously fell out with Stephen Keshi before being recalled on the eve of the 2014 World Cup.

Which of Africa’s stars netted more than Didier Drogba in a single Premier League season? 😁 @EddyDove reveals the 20 African stars who did! 🤓

How many can you name without checking? 🤔 https://t.co/9NE3a5l5Kv

While these anecdotes are useful for a more rounded view of the player, they do not detract significantly from Odemwingie. For all that mixed parentage can sometimes regrettably bring a player’s loyalty into question, he was remarkably dedicated to the cause when he was called up.

While he was hardly a pioneer, his combination of finishing ability, pace, versatility and tactical intelligence also went a long way toward aiding the acceptance of dual nationals in the landscape of the Nigeria national team.

What’s the fastest combine 40 of all time? Will Henry Ruggs break it?