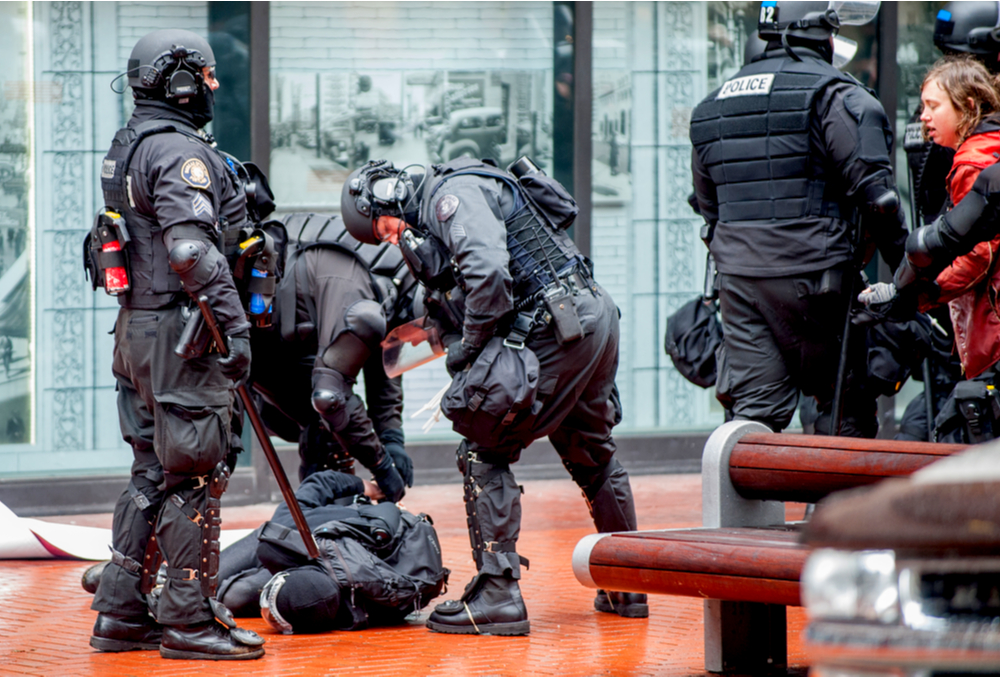 The fevered brows of trust fund Bolshevik youth are at it again. The same type of political toddlers we saw at Occupy Wall Street and in the CHOP in Seattle are now in Portland, Oregon. But there, the mayor seems to be made of sterner stuff than Mayor Jenny Durkan of Seattle.

The Pacific Northwest Youth Liberation Front, a kiddie insurrectionist group made up of anti-free market rioters, is apparently behind recent upheavals in Portland, a recent report said.

Meanwhile, early Tuesday morning, Portland Police updated the public on the situation on city streets. “Many are not dispersing per the lawful order,” the police tweeted. “They are subject to arrest, force,  tear gas or impact weapons. Leave now!”

Some of the items thrown at officers include paint, ball bearings, and glass bottles, which are all criminal acts. pic.twitter.com/9ghKqB8urT

Mayor Ted Wheeler also commented, “We are now more than a month and a half into witnessing nightly violence on our streets. Portland continues to be used as a staging ground for violence night after night.”

“This is causing unprecedented harm to our communities, livelihoods, and Portlanders continue to fear for their safety,” he added. “My main concern is this: That the continuing violence will lead to further injuries or even deaths.”

A person was seriously injured in Portland last night. This should not have happened. I spoke with US Attorney Bill Williams about the injuries and learned that the U.S. Marshals Service will be conducting a full investigation.

The Pacific Northwest Youth Liberation Front has a Twitter account with over 21,000 followers and claims to be a “decentralized network of autonomous youth collectives dedicated to direct action towards liberation.” The brilliant television series “Portlandia” comes to mind.

Trying to ignore the fact that their self-description sounds like the scene in “Monty Python and the Holy Grail” in which the peasant declares, “Listen, strange women lyin’ in ponds distributin’ swords is no basis for a system of government! Supreme executive power derives from a mandate from the masses, not from some farcical aquatic ceremony,” the Pacific Northwest Youth Liberation Front does not exactly have a way with words.

Early Monday, they tweeted, “The Feds and Portland Police are very quickly finding out that if they build a fortress and use literal siege tactics, the People will put their f—ing fortress under siege.” So now a band of scruffy left-wing youth speaks for “the People.” How convenient for them. The group added, “Portland is an autonomous zone, b–ch.” Their eloquence speaks volumes.

But apparently all is not perfect in socialist paradise, as some tell of a rift between the youth group and Black Lives Matter.

Could it be that cracks are starting to appear in the left-wing edifice? Do bunches of spoiled white kids rioting on their parents dime have much in common with black revolutionaries?

This piece was written by David Kamioner on July 14, 2020. It originally appeared in LifeZette and is used by permission.

Read more at LifeZette:
Goya Foods sales take off after liberal boycott
Five Guys employees refuse to serve Alabama cops: End up getting fired
Black singer ‘Lady A’ eviscerates Lady Antebellum for using their white privilege to sue her over her name

Britons are urged to stay away from beaches today with dry, sunny weather and...