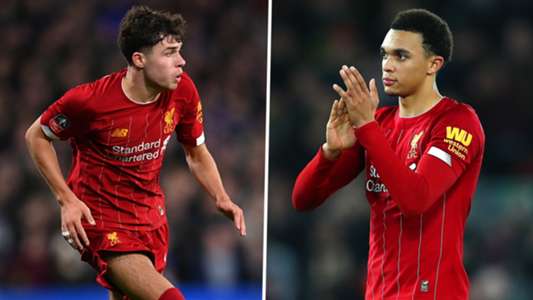 Andy Robertson is doing his bit to help Neco Williams unlock the potential that Liverpool believe will one day make him a senior star.

Another highly-rated product of the club’s academy system has enjoyed a breakthrough campaign in 2019-20.

The 19-year-old Welshman has taken in 10 appearances across all competitions, including the first Premier League starts of his fledgling career.

Jurgen Klopp has used Williams on the right and left of his back four, with a versatile operator able to tick a number of boxes.

It is, however, at right-back that he is expected to settle down, placing him into direct competition with England international Trent Alexander-Arnold.

Robertson is looking to help Williams in that battle for minutes, with important nuggets of advice being passed on to a teenager being tipped to reach the very top of the game.

“It’s great to see a young full-back coming through. It’s great to see him and that’s the last two games he’s started now, which will do his confidence and experience, everything, a world of good.

“I’ve spoken to him, I’ve given him small pointers but I’m not sure he needs them, because he’s got so much ability and so much energy, so much confidence in his own ability that he’ll have a fantastic career in the game.

“I hope he keeps on gaining that experience and keeps getting the game time because that’s so important for him. He’s been amazing in training all season so I’m glad he’s starting to get his reward with making his debut, getting his first start and then getting a couple of consecutive starts under his belt.

“So, he’s been great the games he’s played, it’s a great learning curve for him. He’s made mistakes and he’s done stuff really well but you can only learn when you are playing at the highest level and he is certainly doing that and every game he’s getting better and better.

“Long may that continue because it’s only good to have that competition for places. Obviously, being a right-back he’s facing probably one of the best there is in the world right now in Trent [Alexander-Arnold].

“But he’s got an abundance of ability and he can play both full-back positions pretty easily, so I’m sure he will push me and Trent all the way next season and that’s what we need to have – healthy competition in the squad.”

Williams, who has now taken in the five Premier League appearances required to get a title winners’ medal, will be hoping to see more competitive action when Liverpool return to action with a trip to Arsenal to Wednesday.

‘Mourinho one of greatest and no yesterday’s man’ – Former Spurs star O’Hara baffled...

What is Hamilton? A guide to the hit musical streaming on Disney+

No Time To Die: The verdict on Billie Eilish’s James Bond theme