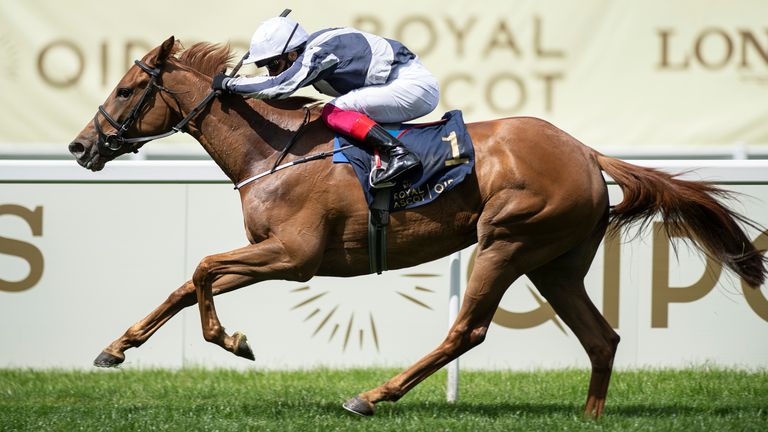 Frankie Dettori was once more the star of the show on the final day of Royal Ascot as he rode a 150/1 treble on Campanelle, Alpine Star and Palace Pier.

That was enough to secure him the title of leading jockey at the meeting, edging out Jim Crowley with more second-places after they each rode six winners, while Palace Pier’s victory gave John Gosden his sixth winner and wrapped up the leading trainer honour for him on the five days.

Dettori completed his hat-trick on Palace Pier in the St James’s Palace Stakes.

William Buick settled market leader Pinatubo, last year’s champion juvenile, at the back of the pack in what transpired to be a fairly tactical affair, with Guineas second Wichita trying to make every yard under Ryan Moore.

Threat shortly looked like going for a hand in the final with a few furlongs to operate, but his effort petered out as Pinatubo and Palace Pier came flying down the surface.

Palace Pier (4-1) kept finding for pressure in the dying strides and just edged out Pinatubo, with Wichita sticking on gamely for third on the rail.

That gave Dettori a quickfire Group One double after that he won the Coronation Stakes on Alpine Star.

The fillies’ event over a mile had been the sole Royal Ascot Group One to elude the Italian during his lengthy career, but Jessica Harrington’s charge ensured Dettori’s wait was over.

Sent off a 9-2 shot, Alpine Star responded excellently when Dettori gave her the signal a couple of furlongs out and the further she went, the healthy her advantage became on the field.

American raider Sharing took some time to hit top stride down the outside, but she sooner or later motored right through to take 2nd for Cambridge-born trainer Graham Motion.

Ward had trained 10 previous victors at the meeting and Campanelle gave him an 11th success with a gutsy performance in the five-furlong heat.

Dettori produced her late in your day to collar Sacred within the distance and edge clear at the post.

The jockey had high hopes of a third Group One winner on Sceptical in the Diamond Jubilee Stakes.

But he had to be in for third place as Hello Youmzain gave jockey Kevin Stott a first Royal Ascot winner.

The Kevin Ryan-trained 4-1 chance was smartly away and led the group down the middle of the track before tacking to the stands’ rail after about three furlongs.

He remained in the firing line throughout and though Dettori tried his most useful on favourite Sceptical, Hello Youmzain was just too strong as he fended off the late challenge of Dream Of Dreams.

Stott and Ryan quickly made it a famous double as Hey Jonesy just held on from the late-charging Summerghand in the Wokingham Handicap.

The 18-1 winner was clearly in-front on the far side inside the final furlong, but Summerghand was absolutely flying down the stands’ side under James Doyle.

He was closing with every stride and the pair flashed at night post together, with a photograph confirming Hey Jonesy had just held on.

William Buick bided his time on the Charlie Fellowes-trained Chiefofchiefs (20-1), as Vintage Brut set the pace. Nahaarr took over and set sail for home, but that he was collared in the last 100 yards.

Chiefofchiefs was responsible at the final to score by a length and quarter, with Burmese Waltz 2nd and Nahaarr a head away in third.

Nando Parrado sprang a 150-1 shock in the Coventry Stakes, a record-breaking starting price for a Royal Ascot winner.

Beaten in to fifth on his racecourse debut at Newmarket early in the day this month, Clive Cox’s charge showed plenty of improvement to bag this six-furlong contest.

Partnered by Adam Kirby, Nando Parrado was in front with a couple of furlongs to run always looked like holding the late thrust of Qaader.

Who Dares Wins gave trainer Alan King a third winner of the week as that he lifted the closing Queen Alexandra Stakes.

A Grade Two winner over fences throughout the winter, the eight-year-old, sent off the even-money favourite, relished every yard of the near two-mile-six-furlong trip as that he held The Grand Visir in a decent finish.

Liv Morgan crashed the wedding of Lana and Bobby Lashley

How shipping companies can improve their last-mile delivery function