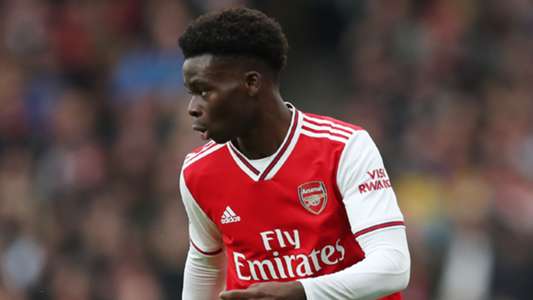 Bukayo Saka has equalled Alex Oxlade-Chamberlain’s Arsenal record with his strike in their 2-0 victory over Wolverhampton Wanderers on Saturday.

The full-back opened the scoring for the Gunners with a brilliant finish in the 43rd minute before Alexandre Lacazette sealed the win.

The effort is his first in the Premier League since that he made his debut in the English top-flight in January 2019 after that he was promoted to the very first team.

The forward, thus, becomes the 2nd youngest English player to score a Premier League goal for the Gunners after Oxlade-Chamberlain, who now plays with Liverpool

Saka has been a consistent performer for the Emirates Stadium outfit this season and it has been delivering impressive showings which have endeared him to the Gunners fans.

The versatile player has made 34 appearances across all competitions, including 22 in the Premier League.

His performances have helped Mikel Arteta’s men to their current seventh position on the league dining table after 12 wins, 13 draws and eight losses.

Saka was named the club’s player of the month for February owing to his eye-catching displays and he’s in contention for his second, having been nominated for the June edition.

The English-born defender has featured for England youth teams but he’s still permitted play for Nigeria, where his parents hail from.

The 18-year-old will hope to carry on his consistent performances and help the Gunners clinch a place in Europe at the conclusion of the growing season.

Saka, who has started 16 Premier League games in this campaign, will desire to feature when Arsenal accept Kelechi Iheanacho’s Leicester City in their next league game on Tuesday.

‘Pressure is just opportunity’ – Klopp calls on players to seize difficult schedule as...