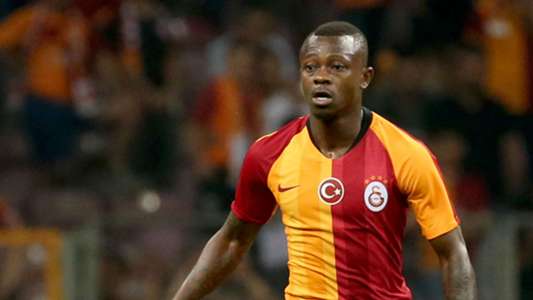 Needing a victory over Huseyin Cimsir’s men in which to stay contention for the Turkish elite division title, they bowed in the home to the rampaging visitors.

Algeria international Sofiane Feghouli – who was featuring in his 25th game of the growing season was given the marching orders by referee Cuneyt Cakir in the 31st for a dangerous play.

Even at their numerical disadvantage, the hosts showed great mental strength but blew away several scoring chances.

For their opportunities, however, it was the Black Sea Storm who took the lead with four minutes left in to the half-time break thanks to a well-taken penalty from captain Jose Sosa after a foul by Ryan Donk.

Sosa turned provider for Filip Novak in the 70th minute to help Trabzonspor race to a two-goal lead at the Turk Telecom Stadium.

Despite the deficit, Gala kept fighting got their consolation through the Cote d’Ivoire star who beat goalkeeper Ugurcan Cakir from the penalty spot.

Seconds later, Cimsir’s team regained their two-goal advantage courtesy of Alexander Sorloth with the last kick of the encounter.

Seri who now boasts of two goals in 2010 was on parade from start to finish, while Morocco’s Younes Belhanda was replaced in the 77th minute by Emin Bayram.

Nigeria’s Jesse Sekidika was brought in for Omer Bayram early in the 46th minute, while DR Congo’s Christian Luyindama was not listed for the overall game.

For Trabzonspor, Anthony Nwakaeme was introduced for Sosa with four minutes left to play, as well as Ghana’s Caleb Ekuban for SosaBilal Basacikoglu.

On-loan Stoke City midfielder Badou Ndiaye made the starting lineup, albeit he was substituted for Brazil’s Guilherme in the 71st minute as Morocco’s Manuel da Costa was in action from start to finish.

Seri could be targeting victory with his team when they face Alanyaspor on Wednesday as Nwakaeme is expected to lead his club’s attacking setup versus Antalyaspor on the same day.

AEW: Singing for my brother’s hero 17 years after he died