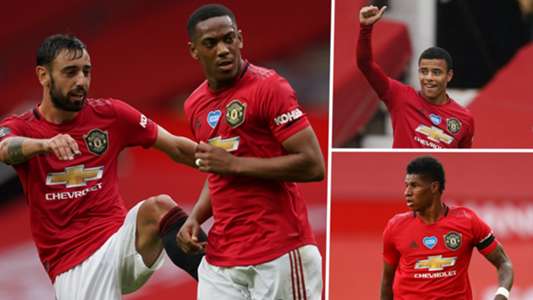 The Norwegian manager believes that given the right support, his young attackers can go on to achieve great things at the club

Marcus Rashford, Anthony Martial and Mason Greenwood are the toast of the town at Old Trafford right now, and Ole Gunnar Solskjaer plans to give the prodigious trio all the freedom to match the exploits of another famous Manchester United attacking line.

The young forwards – Martial is the eldest at 24, while Greenwood is still three months shy of his 19th birthday – have caused a storm at United since the Premier League resumed in June following the interruption caused by the coronavirus pandemic.

Ably assisted by the likes of Bruno Fernandes and a fit-again Paul Pogba further back, between them the three have scored nine goals in five league outings to inspire the new-look Red Devils, who have netted 15 in the same time-frame to record four wins and a draw to strengthen their top-four push.

Stellar forward lines are nothing new at the club, from 1960s legends George Best, Bobby Charlton and Denis Law to the more recent partnership forged between Wayne Rooney, Cristiano Ronaldo and Carlos Tevez which helped deliver Champions League glory in 2007-8.

And Solskjaer believes that like those illustrious predecessors, United’s new goal-getters must temper freedom with discipline in order to keep taking the world by storm.

“It’s not new for United,” the Norwegian said when asked by reporters if the likes of Barcelona’s famed MSN trident served as inspiration for his young stars.

“Did you not watch Rooney, Ronaldo and Tevez when they were playing, when Sir Alex Ferguson gave them some freedom but within a framework and structure?

“So we do work a lot on patterns and positions and where we want the players to be.

“There has been too much, last year, sometimes this year, players who want to gravitate over to the left, and go on there and play tippy-tappy football.

“That’s something we wanted to get rid of and we’ve been more progressive and more disciplined in our positions.”

Greenwood in particular has stood out in the weeks following the Premier League’s restart, scoring four times in his last three starts to make himself an automatic choice for Solskjaer.

The manager is in no doubt with regards to his potential, and called on him to keep working hard in order to add to his already impressive goal tally.

“I’ve said it many times, he can go as far as he wants,” he added. “He has the talent to go so far and is creating chances himself.

“Our job is to get him into positions where he can finish, because he does hit the target.

“He’ll make the goalkeeper have to work, so keep on giving him chances and he’s got a chance to score more.”

Busy Philipps’ 7-Year-Old Daughter Gave Her The Confidence To Post This Bikini Pic!

Patriots investigated by NFL on whether team recorded opponent video

Trump’s State of the Union speech was the most exploitative TV I’ve seen in...