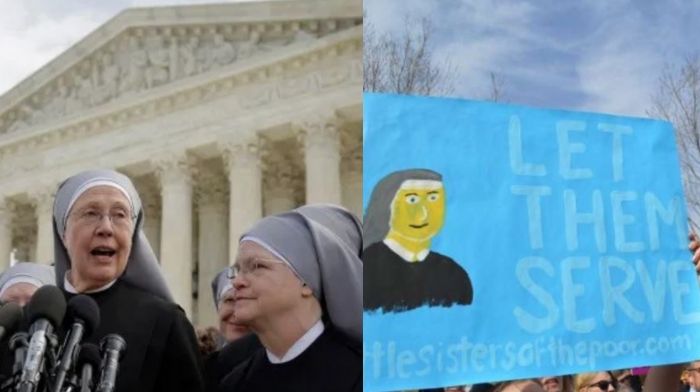 The Supreme Court ruled in favour of a Trump administration decision that expanded religious exemptions from providing contraception under Obamacare.

The 7-2 ruling by the Supreme Court on Wednesday backed The Little Sisters of the Poor, a Catholic organization that provided elderly care but objected to providing contraception under the Affordable Care Act, also known as Obamacare. The Trump administration in 2017 expanded religious exemptions to the Little Sisters and other groups, but they were challenged by the state of Pennsylvania.

“For over 150 years, the Little Sisters have engaged in faithful service and sacrifice, motivated by a religious calling to surrender all for the sake of their brother,” Justice Clarence Thomas wrote in the majority ruling. “But for the past seven years, they – like many other religious objectors who have participated in the litigation and rulemakings leading up to today’s decision – have had to fight for the ability to continue in their noble work without violating their sincerely held religious beliefs.”

“We hold today that the Departments had the statutory authority to craft that exemption, as well as the contemporaneously issued moral exemption. We further hold that the rules promulgating these exemptions are free from procedural defects,” Thomas added.

A Heartening Decision From The Supreme Court!

However, Justices Sotomayor and Ginsburg dissented, arguing that “today, for the first time, the Court casts totally aside countervailing rights and interests in its zeal to secure religious rights to the nth degree.”

Ginsburg claimed that “this Court leaves women workers to fend for themselves, to seek contraceptive coverage from sources other than their employer’s insurer, and, absent another available source of funding, to pay for contraceptive services out of their own pockets.”

Mother Loraine Marie Maguire of the Little Sisters said in a statement that they were “overjoyed that, once again, the Supreme Court has protected our right to serve the elderly without violating our faith.”

I think all good conservatives feel the same way, as they recognize that the they should be free to care for so many, without violating the tenets of their faith! After many defeats in lower courts, it is certainly heartening to see the Supreme Court rule the right way.

‘Pray for Lebanon’ – Salah and African stars seek support for victims of Beirut...