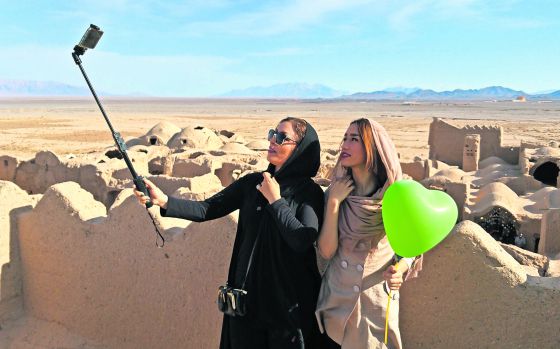 I arrived in Iran as all western travelers do: loaded with prejudice. It was four in the morning and I had the challenge of getting a visa ahead of me on arrival (upon arrival), a very recent modality that avoids the cumbersome and expensive process that before supposed to obtain the Iran visa, but of which nobody, not even the Iranian Embassy itself, had been able to give me exact information.

However, the sleepy official who attended me went out of his way in kindness and in just 10 minutes he had the procedure done (it is true that only my partner and I were on the flight in that circumstance) and customs officials dispatched me with the The same speed, the same generous smile and a “Welcome to Iran” that sounded, Sabina would say, like a door slammed with a question mark against my Western prejudices.

The axiom that when you travel you realize that things are not as they tell you on the news seems to be made for Iran. The image that we have of the Ayatollah country, a thousand times spread, is black, very black. A country where everything is forbidden, where everything is sin and where you get spanked for dancing the Happy. And it is true that its rulers are capable of punishing adolescents for the daring to celebrate a mixed party, determined to keep 80 million inhabitants in the Middle Ages of morality. But the rulers are one thing and the ruled people another. And that is also learned in Iran. I have seen few people as friendly, open and willing to go abroad as the Iranians. And anyone who has traveled the country will confirm my opinion.

The bolt to which the ayatollahs are subjected leads to an urgent need to know, to know, to speak, to contact anyone who comes from outside. Entering an Iranian restaurant (when you find it, because they do not abound) means ending up – inevitably – making yourself selfies with all the families at the adjacent tables; the parents will send some adolescent daughter or son, who is gossiping in English, to ask where you are from, and, second and inevitable, what do you think of Iran.

The most beautiful city

With this preamble and once prejudices are left in the closet, the traveler who wants a first immersion in the country of the Persians would recommend a route of about 10 days for the best of the south. A route that should start in Isfahan, the most beautiful city in Iran. Isfahan is many things, but above all, it is Naghsh-e-Jahan, the great Imam Square, the theater of worldly Iranian varieties. A place made for solemnity where, however, the colorful existence of this country of happy people is staged daily. The solemnity of the Naghsh-e-Jahan buildings contrasts with the popular revelry in this rectangular square, the largest in Iran. Iranians love to picnic. And a beautiful square like this one with the soft grass floor is a perfect place.

Naghsh-e-Jahan is an open-air bazaar of popular intimacies. If the weather accompanies you see entire families lying on rugs in the grass. Modern girls, probably arrived from Tehran (Isfahan is one of the favorite destinations for national tourism), with the scarf pinned in an impossible way in the bun and very generous makeup, shopping in one of the shops of the bazaar. There are long queues to ride in buggies that go around the plaza quickly. There are children running and wedding couples immortalizing themselves with a stick selfie. There is bustle, there is heat and a lot of color in Isfahan.

The next stop would be Yazd, the big surprise of my trip. Because from Isfahan you expect everything, so much is the visual and written information that we have of it. But nobody had warned me that Yazd was still a true desert city, a maze of narrow and irregular alleys, flanked by adobe-walled houses through which you could come across at any time with Marco Polo and his entourage. In addition, the old part is a pedestrian and collected city, perfect for walking and very friendly to the traveler because everything is close by. The Friday mosque is beautiful, as well as the atmosphere of the bazaar, but the best thing is to wander through its alleys in the chiaroscuro at sunset or go up to one of the many roofs that have been enabled as viewpoints and restaurants to delight in the sight of that sea ​​of ​​mud domes, minarets and ventilation towers.

From there I would recommend continuing to Shiraz, another of the great monumental cities in the south, although nothing comparable to Isfahan. The Shah-e-Cheragh mausoleum, one of the holiest and most famous pilgrimage centers in Iran, is essential; I recommend going at sunset. And, of course, the most demanded excursion in Shiraz and for what many travelers come to this city: the ruins of Persepolis, which are 70 kilometers away.

Coming to Iran and not seeing Persepolis is like going to Rome and not visiting the Colosseum. Alexander the Great left the ancient Persian capital foxed in 331 BC, but even so its ruins speak of the magnificence of its palaces and buildings and the degree of development that the Persian empire reached more than 2,500 years ago.

Our Planet Matters: What’s the BBC plan all about?