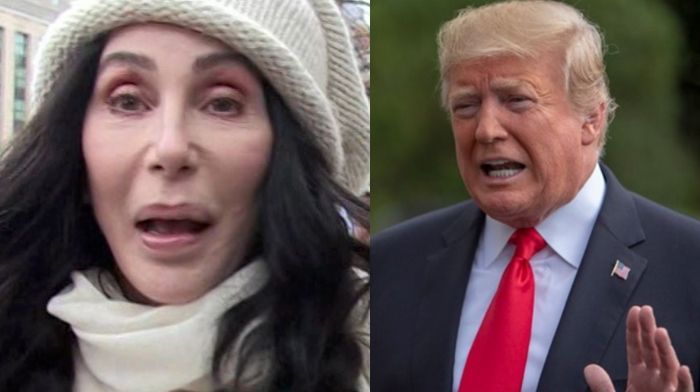 The pop singer Cher and her fellow liberal elites of the entertainment industry spent weeks being furious that President Donald Trump was not wearing a mask amidst the coronavirus pandemic.

That’s why you would think that Cher would have taken a break from her constant Trump bashing over the weekend, when the president finally did wear a mask in public for the first time on Saturday while touring Walter Reed hospital in Washington, D.C.

Unfortunately, Cher instead showed that her distaste for Trump has no limits, as she still found a way to not be satisfied by Trump’s behavior despite the fact that he had done exactly what she wanted him to do.

Cher took to Twitter on Saturday evening to post the kind of unhinged, nonsensical meltdown against Trump that we’ve come to expect from her. The tweet was full of her usual grammatical errors and random capitalized letters, making it especially difficult to read.

“trump Cares Nothing About Our Vets,Our Country,Ppl Who Are Dying of Covid,Ppl From Black Lives Matter,Kids He Keeps [locked] In Cages,Nurses,& Drs Who Are Dying Because He Wont Protect Them,HE KILLS AMERICANS WITHOUT A THOUGHT,HE KILLS 4 ADULATION AT RALLIES,” Cher wrote.

Not stopping there, hours later Cher added that Trump “needs to be in solitary confinement for the rest of his life.”

trump Needs To Be In Solitary
Confinement 4 The Rest O His Life,

Earlier this month, in a tweet that has since been deleted, Cher pushed a bizarre conspiracy theory that outrageously claimed that Trump “only wants to save whites and white supremacists” from COVID-19.

We can only imagine how much Cher will lose it when Trump gets reelected come November! Now that’s an unhinged Twitter meltdown that we can all look forward to.

This piece was written by PopZette Staff on July 13, 2020. It originally appeared in LifeZette and is used by permission.

Read more at LifeZette:
Goya Foods sales take off after liberal boycott
Ricky Gervais torches cancel culture and ‘outrage mobs:’ Says ‘The Office’ could never be made today
NFL legend Tony Dungy blasts CNN host Don Lemon: Nobody who ‘believes the Bible’ would agree with him

Do I look indigenous? Or the choice of identity | Opinion

Morrison in trouble with Yanga SC after going AWOL since derby defeat to Simba...