Home World Trump says US will ‘probably’ relocate some troops from Germany to Poland... 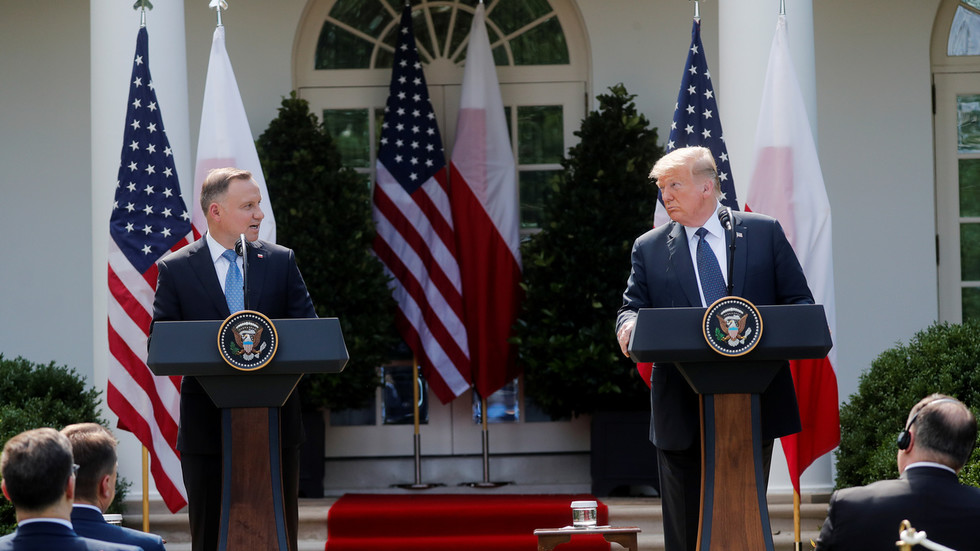 Some of the US troops leaving Germany will be going to Poland at Warsaw’s expense, US President Donald Trump has announced, during a joint press conference with Polish President Andrzej Duda in Washington, DC.

Warsaw “will be paying for the sending of some additional troops, we’ll probably be sending them from Germany to Poland,” Trump said on Wednesday.

Earlier this month, he confirmed that the US will be removing up to 9,500 troops from its bases in Germany, leaving 25,000 roughly in place.

“Some will be coming home and some will be going to other places, but Poland would be one of those places, other places in Europe,” the US president added.

His comments came after Duda told reporters he’d asked the US perhaps not to remove troops from Europe at all, arguing that their presence was needed to guarantee security for Poland and other nations against the danger of “Russian aggression.” The US has had a military presence in Germany since the end of WWII.

Talks with Poland about a permanent US base there never have been successful, but Duda has been keen for yet another US military presence on a rotational basis. He is visiting Washington prior to the Polish presidential election on Sunday.

Trump has justified your decision to grab troops from Germany by citing Berlin’s failure to live up to its commitment to spend at the least two per cent of its GDP on the military. The US president has repeatedly called this out as unacceptable, accusing the Europeans of freeloading on the US, which spends almost a trillion dollars every year on the military – and contains seen its spending rise under Trump.

Only eight NATO members, Poland being one of these, have up to now hit that target.

Moscow has denounced Poland’s calls for US presence as irresponsible, and the country’s new security strategy, claiming a threat from Russia, as “propagandist” and fictitious.

Man, 26, ‘shot dead a seven-year-old girl just THREE HOURS after being released from...