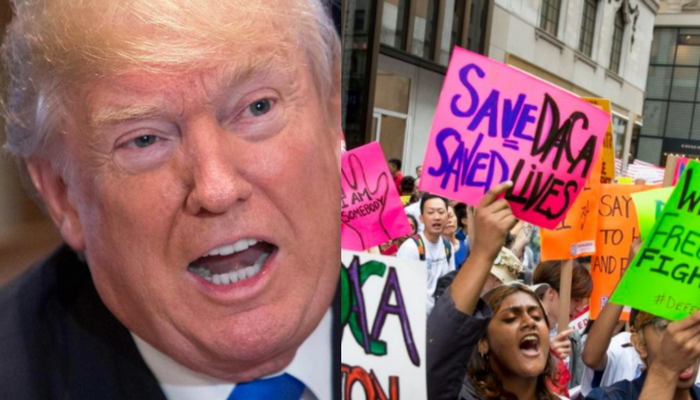 The Supreme Court ruled against the White House last month in a 5-4 decision with Chief Justice John Roberts casting the deciding vote.

The ruling did not address the merits of the program but rather, the method in which the Department of Homeland Security chose in rescinding the Obama-era program.

In their decision, the Court made clear that the President did indeed have the authority to rescind the program, The Hill reports.

The Supreme Court asked us to resubmit on DACA, nothing was lost or won. They “punted”, much like in a football game (where hopefully they would stand for our great American Flag). We will be submitting enhanced papers shortly in order to properly fulfil the Supreme Court’s…..

From the moment the Supreme Court issued its ruling, President Trump has vowed to keep fighting against the DACA program and its illegal implementation.

“We will be submitting enhanced papers shortly,” he tweeted, laying into Democrats for not working with him on an acceptable plan to help those caught in limbo by Obama’s program.

“I have wanted to take care of DACA recipients better than the ‘Do Nothing Democrats,’ but for two years they refused to negotiate,” he wrote. “They have abandoned DACA.”

President Trump easily could have let this issue linger as an election-time wedge issue, but when he says he’s going to do something, you better believe he’s going to follow through.

RELATED: Biden: Criminal Illegal Aliens Will Be Safe From Deportation In First 100 Days Of My Presidency

Following the June ruling, President Trump hammered the Supreme Court on this decision as well as others in which Roberts sided with the liberal justices.

“These horrible [and] politically charged decisions coming out of the Supreme Court are shotgun blasts into the face of people that are proud to call themselves Republicans or Conservatives,” he fumed.

He followed up by noting the Supreme Court itself will be an election issue.

At least someone on the SCOTUS is using his head. As for John Roberts? Somebody got something on him pic.twitter.com/OZVaWBNLvX

“We need more Justices or we will lose our [Second] Amendment [and] everything else,” the President wrote. “Vote Trump 2020!”

By contrast, Democrat nominee Joe Biden proposed a freeze on deportations for all illegal aliens, regardless of criminal history and regardless of the threat to the American people, during his first 100 days in office.

Joe Exotic and Doc Antle are not a joke… so why are we romanticising...