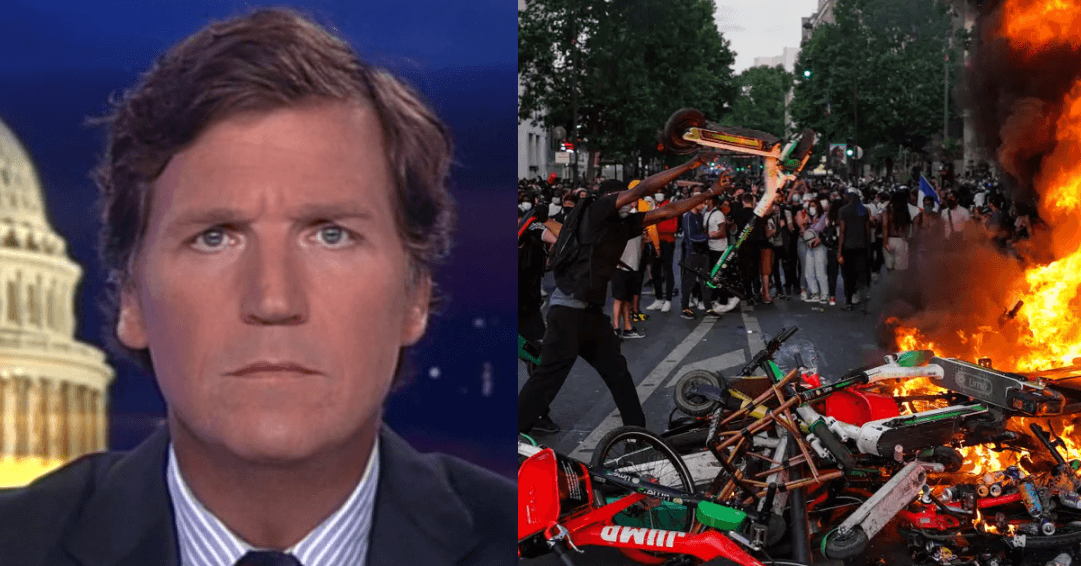 Fox News host Tucker Carlson said that there has probably never been a “dumber group” in all of American history than the Black Lives Matter rioters.

Carlson: “These People Are Idiots!

In his opening monologue on Wednesday night, Carlson said that what we are seeing in this country today are not protests, and have nothing at all to do with the death of George Floyd or the apparent threat of “systemic racism.”

“These are definitely not protestors, they’re not even rioters! They are the armed militia of the Democratic Party,” Carlson argued. “They’re working to overthrow our system of government, and are trying to put themselves in power. That’s all obvious now. It’s genuinely sinister.”

But, along the way of people speaking out against Black Lives Matter, Tucker said that people may have “missed something that is also true,” and “highly amusing,” in that “these people are idiots”:

The angry children you watch set fire to Wendy’s and topple statues and scream at you on tv day after day are truly and utterly stupid. There has probably never been a dumber group gathered in one single place in all American history. They’re mouthbreathers! They know nothing! They couldn’t inform you who George Washington was, they couldn’t tell you once the civil war was fought, probably not even to the century! They say they oppose racism, and then they rip down monuments to abolitionists! They don’t begin to see the contradiction because, because they don’t know who the abolitionists were! They think it’s a band from the 80s!

Of course, many of these stupid individuals are those who are supposedly “‘very well educated’ and have the worthless credentials we are told to want for our children,” Carlson noted.

“They went to Duke, they work at some non-profit,” that he continued. “They’re supposedly impressive but they’re not impressive at all. They’re incredibly dumb. They fall for any lie no matter how preposterous. The more preposterous the lie, the more likely they are to fall for it! And like small children, they are afraid of everything.”

They Fall For Anything!

Some types of these preposterous lies add a Hispanic utilities worker who cracked his knuckles at a stop light being accused of doing a white supremacist gang sign, and Libby Schaff, the mayor of Oakland, mistaking exercise equipment for KKK nooses in a park.

“Talk about textbook hysteria! But it was also hysterically funny,” Tucker added. “For people this neurotic, life is one long horror movie. They squirm in their seats paralyzed by fear. Even the simplest and most obvious decisions become impossible to make.”

He concluded with a straightforward question to the viewers.

“Can people this damaged and weak be capable of running a country?” The answer, he said, “is of course not, and we definitely cannot let them.”

Tucker Carlson is precisely right – Black Lives Matter are incredibly dumb and unintelligent, and must be kept a long way away from the wheels of power!

Tucker Carlson: “These people are idiots. The angry children you watch set fire to Wendy’s & topple statues & scream at you on television day after day are truly and utterly stupid. There has probably never been a dumber group gathered in one place in all of American history.” pic.twitter.com/jzn9tF0DBX

‘Liverpool have made the beautiful game more beautiful than ever’ – John W Henry...