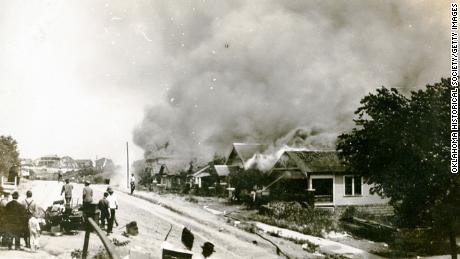 The test excavation conducted Monday is part of a study to determine whether there are human remains in the area, and, if so, what state they are in. It was put on hold in March because of the coronavirus pandemic.

“Our work continues to find the graves of our fellow Tulsans who went missing during the 1921 Tulsa Race Massacre. Today, we begin a test excavation in Oaklawn Cemetery to determine what is causing an underground anomaly found by geophysical scanning conducted earlier this year,” Tulsa Mayor G.T. Bynum said on Facebook.

“Because the scan is consistent with a mass grave, a team of some of the foremost researchers in the nation have assembled in Tulsa to assess both the presence and the condition of any human remains at the site in question.”

During the excavation, the Oaklawn Cemetery — where a survey found unmarked graves, as well as large, seemingly human-dug areas that are likely mass graves — is closed to the public. The excavation is expected to take three to six days.

The Tulsa race riot of 1921, also called the Tulsa race massacre, resulted in the death of hundreds of African American residents of the city’s Greenwood district — then a Black economic hub also known as Black Wall Street — when a mob of White rioters looted and burned the community.
Historic accounts say the violence was sparked by a confrontation between a Black resident and a White man who was part of a group of angry White residents demanding the lynching of a young Black man. A conflict between the two men resulted in a struggle over the White man’s gun. Ultimately, the White man was shot, and a White mob began to storm the neighborhood.

Following the attack, 35 city blocks were burned, more than 800 people were injured, and as many as 300 people were killed, according to the Tulsa Historical Society and Museum.
Bodies were buried by strangers in mass graves while the decedents’ families remained detained under martial law, Scott Ellsworth, a University of Michigan historian who has worked on the recovery of the Tulsa riot graves for decades, said in December.

Families were never told whether their loved ones died or where they were buried, and there weren’t any funerals, he added.

The city created a Facebook page with live video feeds and updates on the excavation.

“In Tulsa, if you’re murdered we do everything we can to find out what happened and bring justice for your family,” Bynum said “It should not have taken us 99 years to get to this point of the investigation. But this generation of Tulsans is committed to being a better city, and to doing right by the victims. We will follow the truth where it leads us.”

Josh McDaniels, Browns not looking like match for coaching vacancy