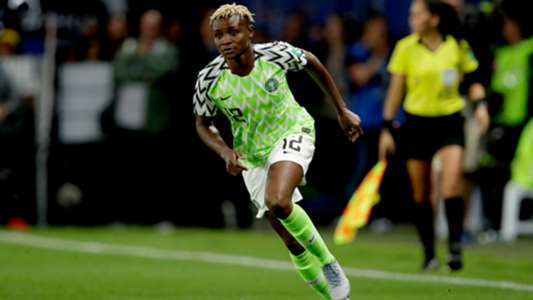 Linkopings head coach Olof Unogard is happy with Uchenna Kanu’s fine start after she opened her maiden Swedish Damallsvenskan goal account with the winner against Djurgardens.

Kanu joined the Swedish outfit from Spanish Primera Iberdrola side Sevilla this summer following the expiration of her six-month contract.
The 23-year-old is gradually establishing herself in Sweden, having featured in three matches, scoring once and providing an assist in two starts for Unogard’s team this season.

Having broken her Damallsvenskan duck last Saturday, the manager believes the Nigerian striker has huge potential in her while encouraging her not to rest on her oars.

“Everyone can see that she has huge potential,” Unogard told Goal.

“She still has to improve in defending but is a great asset for us offensively. Uchenna is a very humble person.

“So I don’t need to tell her anything other than to keep improving and learning, and prepare well for a long and a competitive season.”

The triumph over Durjgardens made it three wins out of three for Unogard’s team as they go top of the Damallsvenskan log.

With his side opening a two-point gap on top of the table, the 31-year-old tactician attributed the progress to the efforts of the players and coaching crew as he focuses on stunning 2018 champions Pitea.

“It feels great, of course. I’m very happy for the players and the staff. They truly deserve it.

“We have been meticulous in choosing the players for this years’ squad. Great players but also great persons, that work well together.

“Against Pitea, it will be a tough away game for us but we are prepared and ready to go again!”

Unogard is eager to guide Linkopings to domestic glory this season and claim a Champions League berth but will count on Kanu to maintain their fine start at Faith Micheal’s Pitea on Wednesday.
Post Views: 46

Banana Farms in Laos Sicken Villagers, Even as They Provide Steady Work