Home World Europe US schools reopening: Trump pointed to European nations in his call to... 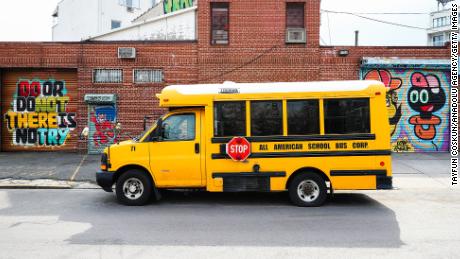 “In Germany, Denmark, Norway, Sweden and many other countries, SCHOOLS ARE OPEN WITH NO PROBLEMS. The Dems think it would be bad for them politically if U.S. schools open before the November Election, but is important for the children & families. May cut off funding if not open!” Trump tweeted on Wednesday.
Most schools in the four countries Trump mentioned have now reopened, although restrictions on how the kids can mingle are still in place. However, apart from Sweden, which has been an outlier in Europe as the only country without a strict lockdown, the countries cited by the US President have reopened schools in a careful, gradual way.
Scientific advice on when and how to reopen schools has varied across different countries. Data so far has shown that children seem to be less at risk of contracting Covid-19, and when they do catch the virus, they are likely to have only mild symptoms. But a number of cases of a rare but serious inflammatory syndrome in children who tested positive for coronavirus have sparked some worries about the impact the disease has on kids.

“The evidence from many countries around the world is that transmission in schools is very low,” said Russell Viner, president of the UK’s Royal College of Paediatrics and Child Health, in a statement. Viner also said that most children catch Covid-19 from adults in their household rather than schools.

Data compiled by UNESCO shows most countries around the world have closed some or all schools for some time during the pandemic. The organization said that at the peak of the crisis, as many as 1.6 billion learners were out of school because of the virus.

Schools in Germany started closing on March 16, with Saarland and Bavaria becoming the first federal states to send kids home. All schools across the country remained closed until April 20.

Since then, each of Germany’s 16 federal states has been in charge of its own reopening timetable. While most states were allowing at least some final-year students to attend in-person classes by the first week of May, the vast majority of German students stayed at home until much later.

In the largest state of Bavaria, for example, schools only reopened for all children on June 15. But even then, some restrictions remained in place, according to the state’s government. Students were still taught in smaller groups and classes are staggered, so not all students are physically present at the same time.
Most German schools are now shut for the summer holiday. The federal government said last month that teaching should return to normal after the end of the break in late August or early September, although mass events will remain suspended until at least October.
The plan comes with a major caveat: the government said schools should reopen only if infection rates in Germany remain low. When a new cluster of infections emerged in a meat plant in Guetersloh in the western state of North Rhine-Westphalia last month, schools and daycare centers were first to shut down.

First to close, first to reopen

Norway was one of the first European countries to close schools on March 12. It began gradually easing its coronavirus restrictions in April. Kindergartens were first to reopen on April 20, with primary schools welcoming pupils in grades one to four a week later.

By May, Norwegian primary and secondary schools were opened for all students, but with new hygienic measures in place. Younger kids have been divided into smaller groups while high schools implemented social distancing measures.

Denmark, like Norway, closed schools early. Its lockdown has been successful — so successful in fact, that the country decided to bring its reopening plan forward in April, after its infection rates declined faster than expected. Denmark was the first country in Europe to reopen schools, with kindergartens and grades one to five allowed to come back on April 15. Older kids started returning to schools on May 18.

While adult education and lifelong learning programs, known as folk high schools, were allowed to reopen on June 8, universities will stay shut until August 1.

Sweden decided early on in the pandemic against imposing a wide coronavirus lockdown. Schools remained opened for all kids under 16, although principals and local authorities were given the power to shut schools in case of a major breakout. But even in Sweden, school trips and large-scale events have been canceled and upper secondary schools were closed on March 17, reopening only on June 15.

The country’s Minister for Education Anna Ekström said the decision to avoid closing down the entire school system was based on science. “The main reason was that it would not be an efficient and effective measure to stop the spread of the virus,” she said at a news conference last month. She said the rate of Covid-19 cases among school staff was similar to that in other professions.

The Swedish government has largely defended the country’s decision not to go into lockdown, while admitting it could have done more to protect the elderly and vulnerable. However, the numbers paint a different picture. Sweden, a country of 10 million, has recorded more than 74,000 cases and 5,500 deaths. The other Nordic countries — Denmark, Norway, Finland and Iceland — have reported a total of just over 31,200 cases and 1,200 deaths for a combined population of more than 16 million.

A graphic in an earlier version of this story has been updated to correct when US states started to reopen.

U.S. officials say intel on Russian bounties was less than conclusive. That misses the...

Italy plans listing for Autostrade by early 2021: sources By Reuters