Home Sports We look at the West Indies squad England will face in Test... 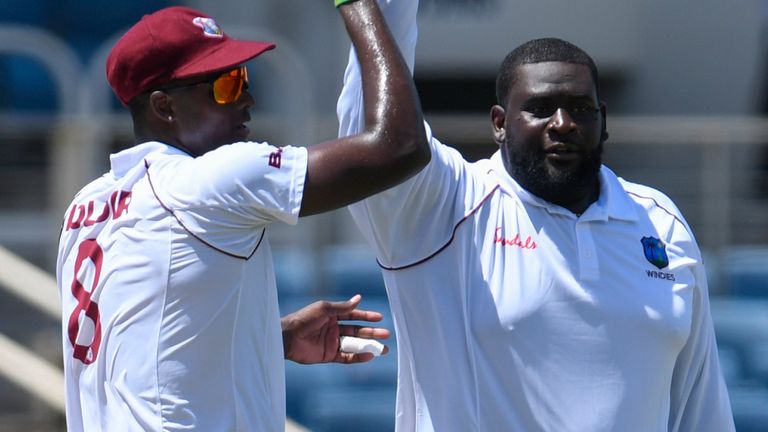 Nine of the 15 players named in the tourists’ squad are from the island, a number of whom have proved thorns in England’s side in the past.

Captain Jason Holder led West Indies to a 2-1 series win in the Caribbean in early 2019, a result that means his side head to England as Wisden Trophy holders for the first time since 2009.

The 28-year-old scored a career-best unbeaten 202 in the series opener 18 months ago as West Indies recorded a thumping 381-run victory, while he then claimed four wickets in the following match in Antigua as his team triumphed by 10 wickets to take an unassailable 2-0 lead.

Holder’s batting record against England is stellar – he averages over 40 against Joe Root’s men, having also scored his maiden Test ton versus them during the drawn 2015 series in the Caribbean.

However, his warm-up form in England has been sketchy, with the captain managing just seven runs in three innings and facing fewer than 30 balls.

Holder was backed up superbly by some fellow Barbadians on their home island in January 2019, with seamer Kemar Roach‘s 5-17 ensuring England were skittled for just 77 in the first innings before off-spinning all-rounder Roston Chase took an eight-wicket haul in the second.

Chase’s strongest suit is his batting – he has managed five tons and seven fifties in his 32 Tests – but, as he showed when razing England, his bowling is more than handy and he became the first West Indies player since Sir Garfield Sobers in 1966 to hit a hundred and take a five-wicket haul in the same Test when he achieved the feat against India in Jamaica in 2016.

Roach was the leading wicket-taker in the 2019 series with England – 18 scalps at 13.88 across the three Tests – and is now West Indies’ ninth most prolific bowler in Test cricket, having claimed 193 victims, one more than the great Wes Hall. Andy Roberts, who took 202, is his next target.

Roach was in fine form for Barbados during the 2019/20 West Indies Championship, bagging 30 wickets in five games at 13.70, including a nine-wicket match haul in his previous game in March.

The paceman was not Barbados’ leading wicket-taker, though, with that accolade going to Chemar Holder – no relation of Jason – who prised 36 wickets at an average below 19, making him not only Barbados’ top man but the leading seam-bowling wicket-taker in the competition.

Hope is another with previous success against England, becoming the first man to score twin centuries in the same first-class match at Headingley when he propelled West Indies to a famous win at Leeds in 2017.

Hope has struggled to back up that performance in Test cricket – he has hit no tons and is averaging only 25.51 in 19 Tests since that game, including a return of just 119 runs at 23.80 in the 2019 series in the Caribbean.

That is in stark contrast to his ODI form – only India’s Rohit Sharma and Virat Kohli scored more ODI runs than his tally of 1,345 in 2019 and his career average in the format is 52.20, the highest of all Windies batsmen.

Doughty opener Brathwaite has not played an ODI since 2017 but is an integral part of West Indies’ Test team and was Hope’s chief ally during the win at Headingley three years ago.

Brathwaite shared a fourth-wicket stand of 246 with Hope to underpin the successful pursuit of 322 and could himself have become the first man to score two centuries in the same game at Leeds had he not clipped Moeen Ali to Ben Stokes at slip on 95 in the run chase.

Brathwaite had a relatively lean West Indies Championship, passing fifty only three times in 15 innings, albeit not as lean as team-mate Brooks, who averaged below 19 in the same number of knocks.

However, the 31-year-old did compile his maiden Test ton against Afghanistan in November, scoring 111 from the No 4 spot in Lucknow.

The final Bajan in the squad, Reifer, is a seam-bowling all-rounder whose only Test to date came in New Zealand in 2017.

The 29-year-old, who has also played two one-day internationals, will provide a left-arm option and did his chances no harm with a five-wicket haul in 11 balls in West Indies’ first practice game at Emirates Old Trafford.

England know all about Joseph, with the wiry seamer impressing in the Antigua Test in 2019, removing Root with a superb rising ball on day one. He then opted to play on during day three despite the death of his mother and dismissed the England skipper again as West Indies sealed a series victory.

Joseph has been affected by injuries before and since that game but is now fully fit and claimed eight wickets across West Indies’ two internal warm-up games in Manchester.

Off-spinner Cornwall, standing 6ft 6in tall and weighing over 20 stone, became the heaviest Test cricketer in history when he debuted against India in 2019 but turned talk from his figure to his figures when he bagged 7-75 and a 10-wicket match haul in his second and most recent Test against Afghanistan in November.

Cornwall has taken over 300 wickets in 62 first-class matches at an average below 24 and picked up 19 in three games in 2018 when West Indies swept England Lions 3-0 in a red-ball series.

Jamaican duo Blackwood and Bonner have been selected off the back of dominant West Indies Championship campaigns, with Blackwood the highest run-scorer in the competition – his 768 runs including a career-best 248 and six half-centuries – and Bonner the fourth.

England have encountered Blackwood’s enterprising style of batting before, with the 28-year-old hitting his maiden Test hundred against them in Antigua in 2015 before his 85 and unbeaten 47 helped West Indies to a series-drawing win in Barbados a few weeks later. Blackwood also chipped in with 49 late on during West Indies’ Hope-inspired victory at Headingley.

Bonner, though, will be experiencing Test cricket for the first time, the 31-year-old rewarded for averaging over 58 domestically this term, with his 523 runs including two tons and as many fifties. He has been described as an “unflappable character” by Windies chairman of selectors, Roger Harper.

Fellow Jamaican Campbell made his Test debut against England in 2019 and smacked James Anderson for the six at North Sound that wrapped up a series win for his team.

The left-hander made starts in almost all of his knocks against England without converting one into a maiden Test fifty, but that finally came in his sixth game, against Afghanistan.

That means the tourists can now call on exactly the same attack that saw off England at home at the beginning of last year.

Watch West Indies’ three-Test series in England live in full on Sky Sports. Our coverage of the opening game, at The Ageas Bowl, begins at 10.30am on Wednesday on Sky Sports Cricket and Sky Sports Main Event.

More than 98,000 people have died from coronavirus in the US

The 10 best new technologies coming out of Las Vegas