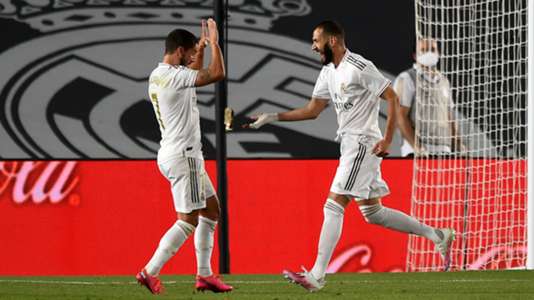 Benzema’s two-goal display in the Spanish capital took his tally to 243 goals for Madrid across all competitions, leapfrogging club great Puskas (242) for fifth on the all-time list.

“It was a great goal, for the move and the finish – I’m delighted for Karim’s goals,” Zidane said after Madrid moved back within two points of leaders and rivals Barcelona.

Eden Hazard also impressed for Madrid – the Belgium star combining with Luka Modric to tee up Benzema for the opening goal in Madrid.

Injury and fitness have hampered Hazard’s maiden Madrid campaign, but the former Chelsea attacker showed glimpses of why Los Blancos invested so heavily in the 29-year-old.

“This was a really good game from Hazard,” Zidane added. “Physically, he was good and played 80 minutes. Sometimes you might think he’s starting to look tired, but then he picks up the ball and sprints away.”

On the title race, Zidane said: “We know that it will likely be like this before the end, but today we are able to be happy because of what we’ve done in the overall game.

“They are the ones fighting; we have to enjoy and congratulate the players because it was a complete game and then think about the next game against Real Sociedad.”

Barca will face third-placed Sevilla on Friday and Zidane added: “We depend on what we are going to do, knowing the situation. I’ll watch the game, but I don’t have the idea in my head that Barcelona will slip up; we have to think about ourselves.”

MLB Could Let Local Governments Decide On Fans In Stands